Comic book publishing house, Zenescope Entertainment, has announced plans for a London-based retailer tour prior to London MCM Comic Con October 26-28th. London MCM will be held at London Excel Convention Centre and Zenescope Entertainment will have a booth throughout MCM weekend. Fans will be able to find limited merchandise, books and art prints and also meet Zenescope artists Jason Cardy and Ian Richardson throughout the weekend.

Prior to MCM, Zenescope will be holding in-store appearances as they visit some of the largest comic book retailers in and around London. The company will be bringing plenty of limited edition merchandise, trade paperbacks, exclusive covers and more.

On Wednesday, October 24th, Zenescope will continue their tour at A Place in Space, located at 96 Church St, Croydon CR0 1RD, UK. They will be there from 12:00 p.m. to 3:00 p.m. Zenescope has partnered with A Place in Space to create a limited exclusive cover specifically for their store.

Follow Zenescope Entertainment on Facebook for more information on signing times and the launch of their November kickstarter here: https://www.facebook.com/zenescope. 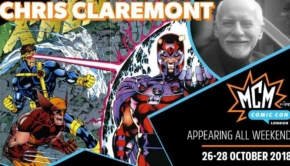