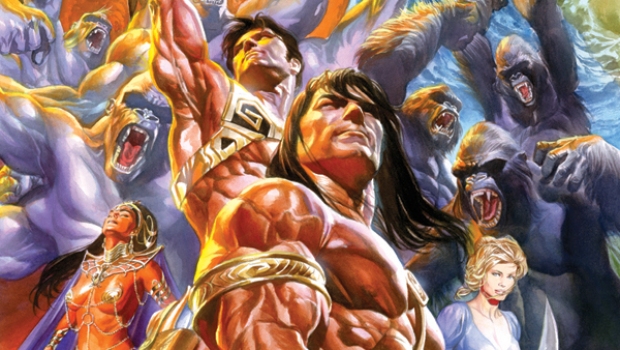 Dynamite Entertainment is proud to announce the upcoming LORDS OF MARS #1 debut in August 2013, a crossover that sees Tarzan and Jane Porter of their LORD OF THE JUNGLE series team with John Carter and Dejah Thoris of the WARLORD OF MARS franchise. The six-issue series will be written by Arvid Nelson and illustrated by Roberto Castro, with the first issue available in multiple cover editions featuring art by Alex Ross, Francesco Francavilla, Dan Panosian, and Ardian Syaf.

In LORDS OF MARS #1, the legendary Tarzan has claimed his title as Lord of Greystoke, but his very life is threatened when a hunting excursion with his fellow “gentlemen” goes disastrously wrong. Meanwhile, on Mars, John Carter is forced to respond to a veiled threat from his defeated enemies. Mars and Earth might be separated by millions of miles, but a sinister force is at work on both planets, setting the two iconic adventurers on a deadly collision course.

“The two greatest heroes of pulp fiction coming together… what could be better than that?” says Arvid Nelson, writer of the six-part miniseries. “And it blows the lid off the possibilities for storytelling. Earth, Mars, lost civilizations, hidden worlds, interplanetary adventures. But above all, we want LORDS OF MARS to be fun. I can’t wait to unleash it on the world.”
Nelson was uniquely suited as the writer for the upcoming LORDS OF MARS series, having contributed storylines to Dynamite’s comic book series LORD OF THE JUNGLE and WARLORD OF MARS previously. However, the writer stresses that the new story will not require readers to have an extensive knowledge of what’s come before. “It’s a great jumping-on point. In fact, I always go out of my way to make sure new readers are never at a loss, regardless of where were are in a series.” That philosophy fits in perfectly with that of Tarzan and John Carter’s shared creator, Edgar Rice Burroughs. “Burroughs was a fanatic for novelty. He didn’t like exploring all the details and intricacies of the things he’d invented; it was always about the shiny and new for him.”

John Carter and Tarzan are the archetypal science fiction and jungle heroes, respectively, whose literary history stretches back over a century. “Carter is more comfortable around human beings than Tarzan. He’s more of a leader, but he’s most in his element in times of conflict, as opposed to the backstabbing and intrigue of ‘peacetime.’ Tarzan is more a force of nature. In terms of raw strength and agility no one can match him, but he’s not fully in control of himself.” Joining these pulp heroes in LORDS OF MARS are their love interests, Jane Porter and Dejah Thoris, who play pivotal roles in the story.

LORDS OF MARS #1 is solicited in the Diamond June Previews catalog for release in August. Alex Ross, one of the industry’s leading artists, provides the Main cover edition, while Eisner-winning Francesco Francavilla and fan-favorite Dan Panosian contribute two additional variant covers. A fourth edition, the Subscription-Only variant, is illustrated by Ardian Syaf and is limited only to retailer initial orders as a reward for dedicated Dynamite fans.