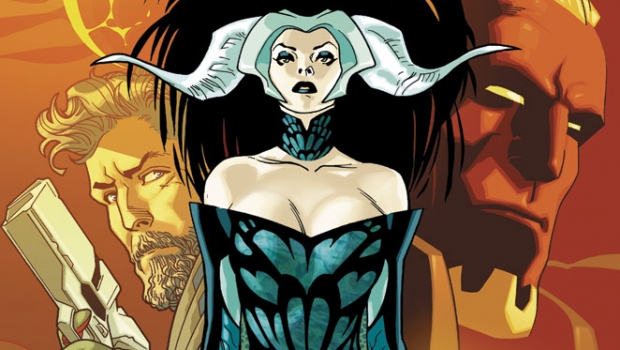 This April, two of the biggest names in comics join forces to bring you a brand-new sci-fi adventure unlike any other! Mark Millar (Kick-Ass, Kingsman: The Secret Service) teams with Stuart Immonen (Star Wars, All-New X-Men) to bring you EMPRESS #1 – a brand new series launching as part of Marvel’s creator-owned ICON imprint.

Imagine you’re married to the worst bad guy in the entire universe. An alien dictator feared by races across the cosmos. He will kill you if you leave, but you must escape for the sake of your three children. Now, Queen Emporia must flee the clutches of her ruthless husband with nothing but her wits, her trusty bodyguard, and three guns in tow. Will their attempt at freedom be short lived?

Created in 2004, Marvel’s ICON imprint is designed specifically for top-tier creators to tell their bold, creator-owned storied featuring their own characters and creations. Producing critically acclaimed titles such as Kick-Ass, Powers, The Secret Service, Men of Wrath and many more, Marvel’s ICON imprint has solidified itself as the place to be for exciting stories from A-list creators.

The starhopping, intergalactic adventure begins this April when Mark Millar and Stuart Immonen bring you the highly anticipated EMPRESS #1 – available in print and digitally!

Retailers: Please note you may return all unsold copies of EMPRESS #1, if you please. Please refer to your Marvel Mailer for additional information on returnability and other offers regarding EMPRESS #1.

Skottie Young Variant Offer: Retailers registered on the Millarworld retailers forum will be able to order an exclusive Skottie Young variant for EMPRESS #1 (DEC158595) before FOC. For more information, check your Marvel Mailer. For retailers still needing to sign up, you can do so here.