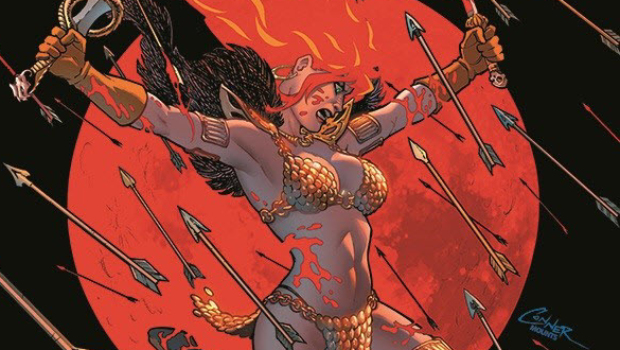 The volume, titled Scorched Earth, reprints issues 1 through 6 of the currently ongoing series and the Lord of Fools one-shot special. This tale of metal and blood chronicles the She-Devil of the Hyrkanian Steppes through becoming queen of her homeland, political and physical bouts with Dragan the Magnificent of Zamora, the introduction of her nephew Kryon, past and present tangles with supernatural forces and much more!   At nearly 180 meaty pages of storytelling, Scorched Earth is a great value at only $19.99. The creative, editorial and marketing teams all agreed that of course the first entire arc needs to be kept together. Fans are getting a sweet deal on this book to start their collection of these volumes off right!   This story is delivered as only the Eisner-nominated writer Mark Russell (Second Coming, The Flintstones) and artist Mirko Colak (Conan) could deliver. Not to be discounted for their similarly acclaimed contributions are colorist Dearbhla Kelly (The Wild Storm: Michael Cray) and letterer Hassan Otsmane-Elhaou (Peter Cannon: Thunderbolt, Lone Ranger) – also an Eisner-nominated critic by night! Artists Bob Q and Katie O’Meara make additional contributions in the special and in critical flashbacks. The tome is all wrapped up in Amanda Conner and Paul Mounts’s breathtaking cover from the second issue.

Writer Mark Russell shared, “What I wanted to do with the first six issues of this story is to show Sonja, not only as somebody who’s good with a sword, but a warrior of the mind as well. Somebody who’s capable of leading people through the darkest danger they’ve ever faced. “

“This first volume (of many!) is designed for the reader that’s familiar with Sonja The Red, or has never even heard of her,” said editor Nate Cosby. “Mark Russell’s reinterpretation of Sonja is a stunning tale that focuses on the reasons for war, of trying to go home again, of finding one’s place in a cruel existence. It’s a masterclass in world-building, that Mark and the entire creative team are putting on. Jump aboard now, it’s going to be an incredible journey!”

Red Sonja Volume 1 TP: Scorched Earth will be solicited in Diamond Comic Distributors’ September 2019 Previews catalog, the premier source of merchandise for the comic book specialty market, and slated for release in November 2019. Comic book fans are encouraged to preorder copies of the issue with their local comic book retailers. It will also be available for individual customer purchase through digital platforms courtesy of Comixology, Kindle, iBooks, Google Play, Dynamite Digital, ComicsPlus, and more!