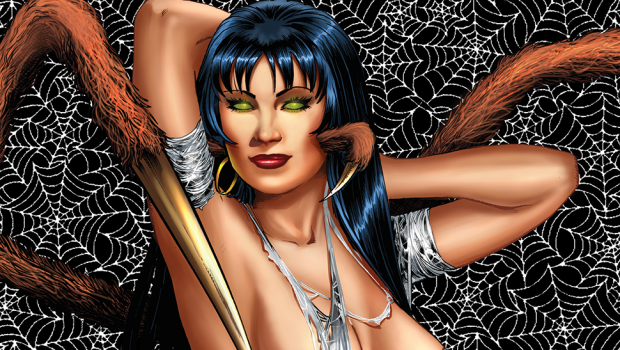 WIDOW UNLEASHED, published by Mike Wolfer Entertainment, will introduce every one of the existing Widow stories to today’s fandom, with the entire run published for the first time in brilliant blazing full-color! But these won’t be trade paperbacks; instead it will be remastered retelling of the entire Widow saga in single-issue increments, just like the old days.

Here’s where it gets even more interesting: Some of you might recall that in 1999-2000 the original stories were reprinted in an adult format, with eight new pages added to each issue. Those pages were deleted from the Widow Archives series of trade paperbacks. Now, not only will those original tales be released for the first time in color, but I’m adding those dozens and dozens of deleted adult pages to the mix! Each issue will be available in main, nude, and adult cover editions, and every installment will also be available in a photo cover edition featuring Natalie Jane as Emma.

But you won’t find WIDOW UNLEASHED in stores… releasing them exclusively through Kickstarter is the plan!

Something else Mike Wolfer is doing is revising the art to correct awkward anatomy; these were drawn at the beginning of his comics career and as an artist, he hás grown a lot since then. They’re also being liberally rewritten, with all-new dialogue mixed in with the old. “In re-reading all those stories, they feel to me like they were written by an inexperienced twenty-something…Because they were! So I’m applying what I’ve learned about writing over the past thirty years to scrub out all of the kooky, silly dialogue to give the stories a more mature feel.” is what Mike has to say about this.

This will be Widow like you’ve never seen her before, along with alien hybrid Brandi Five-One, the demon queen Rissk, Drew Triggert, and the whole cast and crew (even Daikazu!) that made the series the mind-boggling, sexy, scary thrill-ride that’s captivated fans for decades. We’ll have “new” Widow for years to come, delivered every few months in two-issue increments, with a slew of new covers, new color, and new dialogue and art, but hopefully, the same nostalgic feel that so many of you associate with the Arachnid Princess. Stay tuned for more details about the launch of this multi-year campaign, and thanks for your undying loyalty to the character!

People can follow Wolfer’s Kickstarter account so that you’ll be informed when the first campaign launches. https://www.kickstarter.com/profile/mikewolfer

The Land That Time Forgot Returns To Comics →