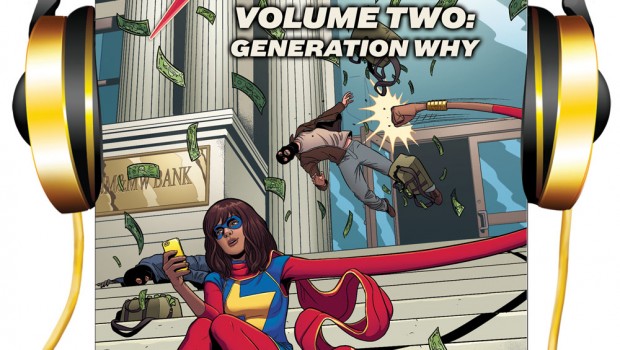 GraphicAudio®, in conjunction with Marvel Comics, presents the audio drama MS. MARVEL VOLUME 2: GENERATION WHY, adapted directly from the Marvel comics themselves. Through cinematic music, a full cast of voices, digital sound effects, you’ll be immersed in this international-hit comic book series like never before!

Who is the Inventor, and what does he want with Ms. Marvel and all her friends? Maybe Wolverine can help! Kamala may be fan-girling out when her favorite (okay maybe one of her Top Five) Super Hero shows up, but that won’t stop her from protecting her hometown.

As Ms. Marvel discovers more about her past, the Inventor continues to threaten her future.

The fan-favorite, critically acclaimed, and award winning new series continues as Kamala Khan proves why she’s the best new Super Hero there is!

Ms. Marvel Volume 2: Generation Why is the latest in a series of GraphicAudio comic adaptions that include Ms. Marvel Volume 1: No Normal and Daredevil: Guardian Devil, in addition to adaptations of the prose novels MARVEL CIVIL WAR, IRON MAN: EXTREMIS, DEADPOOL: PAWS, ANTMAN: NATURAL ENEMY, and many more.

Available from www.GraphicAudio.net and via the FREE GraphicAudio Access™ Mobile App which allows customers to directly download titles on their Android or iOS smartphones and tablets.

CD formats and Marvel TPBs also available at comic shops and Inhuman-loving bookstores near you!