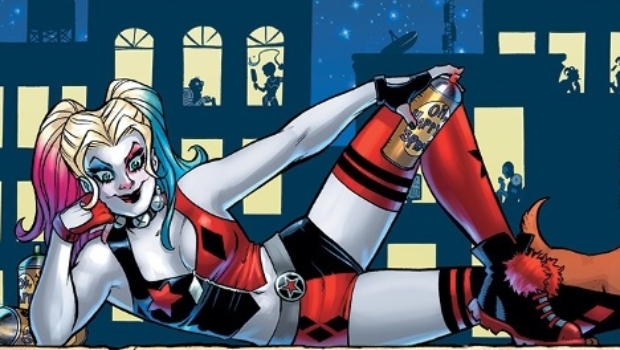 Palmiotti & Conner Return For Harley Quinn and the Birds of Prey

Long-time Harley Quinn co-writer/artist Amanda Conner will be returning to the character – and her friends in the Birds of Prey – in a new DC Black Label title expected to launch in 2020. The four-issue Harley Quinn & the Birds of Prey was announced during a press event at New York Comic Con. Conner and her husband/co-writer Jimmy Palmiotti took over DC’s main Harley Quinn title in 2011 coinciding with the line-wide “New 52” relaunch. Over the course of 7 years and almost 80 issues (when counting the main series and spin-offs), Conner and Palmiotti redefined Harleen Quinzel for modern audiences – with several of their tweaks and companion character creations ending up in various Harley Quinn adaptations including the upcoming DC Universe Harley Quinn cartoon and Warner Bros.’s Birds of Prey (and the Fantabulous Emancipation of One Harley Quinn).

The Joker’s back too. That’s what’ll bring Harley to join forces with Black Canary, Huntress, and Batgirl to take down the host of new baddies that are sure to come with the steep $10,000,000 bounty that Joker’s put on her head.

Conner teases Harley will vex Renee the most, but will be vexed by Cass the most. “That’s how I see it going,” she said. “It’s a whole new set of characters for her to drive nuts.”

A lot has changed since Conner and Palmiotti last had a turn with the Clown Princess. Harley went from a character once defined by wanting to be wanted by the Joker, to a character who can’t seem to get enough of herself.

“Her time has come,” Conner told io9. “For so long she had been a sidekick, a henchperson, a secondary character. It’s time for her to bust out and be her own character. When we got the nod to do the book back in 2013, that’s what we had set out to do. It’s worked out well.”

Harley Quinn and the Birds of Prey is a 32-page, four-issue miniseries. Look out for it come February.

DC Comics will launch Harley Quinn and the Birds of Prey, a new Black Label limited series by Jimmy Palmiotti and Amada Conner, in February.  Each of the four 32-page issues, shipping bi-monthly, will be priced at $5.99.  Palmiotti and Conner’s run, which began in 2013, started the upward track for the character which continues today.