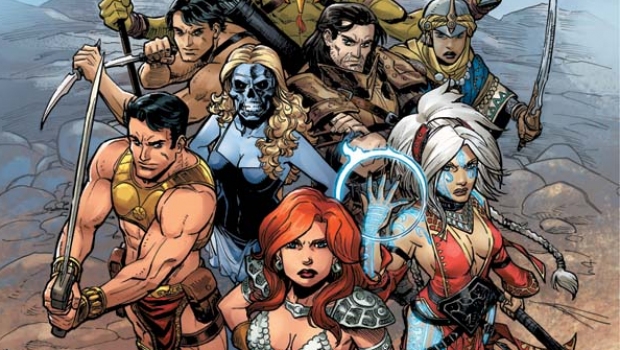 Following the grand tradition of Dynamite Entertainment’s epic crossover events, the October launch of Pathfinder: Worldscape will see the warriors and magic-wielders of Paizo’s beloved roleplaying games crossing swords with many of the comic publisher’s fantasy characters, including Red Sonja, John Carter and Tars Tarkas (of the Warlord of Mars franchise), Tarzan (of Lord of the Jungle), and more!

“Pathfinder: Worldscape teams up the Pathfinder heroes with the adventure fiction legends that inspired fantasy roleplaying games in the first place,” says series writer and Pathfinder publisher/co-creator Erik Mona. “From Robert E. Howard’s Red Sonja to Edgar Rice Burroughs’s John Carter, Tars Tarkas, and Tarzan, to Frank Frazetta’s lost-world hero Thun’da, Pathfinder: Worldscape presents a sword-and-sorcery super-team unlike anything we’ve seen before. The series brings all of these heroes – and many of their darkest villains – to a mysterious dimension of warriors and wizards that allows us to explore the origins and impact of some of fantasy’s most influential characters.”

“Erik Mona is the perfect choice to combine these worlds, as not only is he a Pathfinder expert, but he’s a pulp and comic book fan of the highest order. Add in Jonathan Lau – one of our very best – and you’ve got a cross-over that’s going defy all expectations,” says Joseph Rybandt, Executive Editor.

“Dynamite’s ongoing partnership with Erik Mona and the team at Paizo Publishing has produced epic fantasy stories for comics fans and gamers alike,” says Dynamite CEO and publisher, Nick Barrucci. “Comics fans have come to expect the best in crossovers from us, and with Erik’s help, we are going to tell a tale of swords-and-sorcery unlike anything on stands today!”

The Worldscape beckons in a tale written by Erik Mona and illustrated by Jonathan Lau (Kevin Smith’s Bionic Man). The first issue features covers by Reilly Brown and Ben Caldwell, with a special subscription variant by Sean Izaakse that serves as a homage to the fan-favorite cover of Crisis on Infinite Earths #7. An Ultra-Limited variant edition by Tom Mandrake will also be available.
“If the first issue’s swordfight extravaganza is an indication of the visuals we should expect from the entire series, then Pathfinder: Worldscape will more than prove to be the ambitious action fantasy that I’d craved drawing for a long, long time,” says artist Jonathan Lau. “Without dragging pages of talking heads, Erik moves the narrative along based on the action, truly showing how dynamic combat comics should be written. With so many different and illustrious characters (like Tarzan and Red Sonja) in one storyline, the work itself motivates me better than any late night energy drink on the drawing table!”

As an added bonus, each issue of Pathfinder: Worldscape contains a Pathfinder Roleplaying Game appendix that provides official game statistics for the greatest warriors of Hyboria, Barsoom, Golarion, and Earth, bringing beloved characters like Red Sonja and John Carter into gaming continuity! Also, an original bonus tactical map will be bound into each issue, presented at the standard 1 inch = 5 feet tactical scale suitable for gaming miniatures.