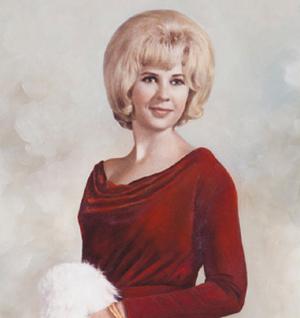 The Rockabye School announced today that it has teamed up with Peggy Sue Gerron and Bluewater Productions to create an original comic book series entitled “Peggy Sue’s Rock & Roll Mysteries” that will illustrate stories and memories about the Pioneers of 1950’s Rock and Roll.

During the 1950’s, Peggy Sue dated Buddy Holly’s drummer Jerry Allison. Buddy, Peggy Sue, and Jerry hung out at the local Hi-D-Ho Drive-In, attended sock hops, and shared rhythm and blues records and plans for the future. Meanwhile, Buddy Holly was transforming from small town Country singer into a giant of Rock ‘n Roll. Peggy Sue was still a high school senior when she was cast into the international spotlight by Buddy Holly’s release of “Peggy Sue” that climbed to the top of the 1957 Billboard Charts. Years later, Buddy Holly recorded Rock & Roll’s first song’ sequel with “Peggy Sue Got Married.” The rest is musical history.

After the plane crash that killed Buddy, Ritchie Valens and J. P. Richardson (“The Big Bopper”) the Crickets reformed. Peggy Sue continued to travel with the group as they toured and recorded, and maintained her friendships with other Rock & Roll pioneers.

“Considering the state of the music industry today, there is a renewed interest in the Pioneers of Rock & Roll who generated so much excitement with their musical talents and charisma,” said Peggy Sue Gerron. “I am looking forward to being a part of an exciting project that will explain some of the mysteries of Rock & Roll that many people have wondered about, but simply did not know.”

As part of the Rockabye School’s mission to encourage music appreciation, “Peggy Sue’s Rock & Roll Mysteries” will pre-launch via an IndieGoGo funding campaign so fans of Peggy Sue, Buddy Holly, and 1950’s Rock & Roll can receive valuable perks in support of the comic book. The top perk is an opportunity to personally speak to Peggy Sue about her remarkable life and experiences.

“We are very excited about being a part of this series,” said Darren Davis, President of Bluewater Productions.” It will appeal to the same readers who made our comic books on John Lennon and Paul McCartney such a success.”