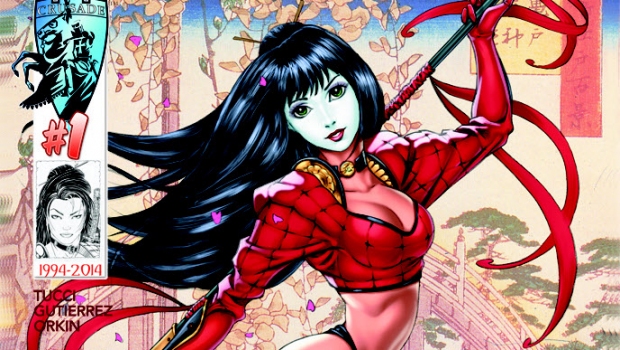 “Hands down, the Phoenix Comic Con is one of our favorite and most successful conventions!” exclaimed Shi creator and publisher Billy Tucci, “ And Phoenix is also the home of Brian Miller and the crew of Hi Fi Design who digitally painted the exclusive cover “Manga Dansu”, so this year will be doubly special”

The multi-Eisner award nominated Shi debuted in 1994 with the modern-day samurai fable, “The Way of the Warrior” #1”. Illustrated by Tucci, co-written with Peter Gutierrez, and colored by Barry Orkin, “Way of the Warrior” transcended independent publishing with a unique melding of Japanese mythology, history, and action not seen before in comics and became an instant comics classic.

The past three editions created for the London Super Comic Con, MegaCon and C2E2 instantly sold out, making these the rarest and most collectibles Shi comics ever. But as per custom, the PCC Exclusive is limited to only 25 copies and each comes signed and individually numbered with a set price of $60.00 US.

In a few short years, the Phoenix Comic Con, the signature pop culture event of the southwest, has rapidly grown to become one of the largest conventions in the country, rivaling even Comic Con International in San Diego. And with the large Manga/Anime attendees and publishers present this year makes for a natural pairing with the Tucci’s “Manga Dansu” cover.

Tucci concluded “I am simply in awe of the perfection that is the Phoenix Comic Con and want to thank Matt Solberg, Joe Boudrie and Roger Dickinson who have always treated us like family. I cannot express how honored I am to be a guest at one of the greatest conventions in the United States!”