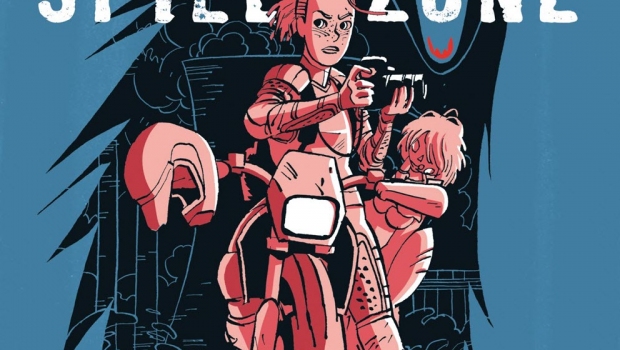 Spill Zone, First Second’s graphic novel was written by Scott Westerfeld (Uglies, Afterworlds, Zer0es) and illustrated by Alex Puvilland (Prince of Persia, Templar).
Their eerie story, of an unexplained Spill that transforms the town of Poughkeepsie, New York, into an ominous neon ground zero, will be released in graphic novel form in May 2017. You can follow along with Addison Merrick as she ventures into the Spill Zone on her motorcycle to take illicit (but highly in demand) photos of the ghost town that may contain an actual ghost—or, at least, a strange energy that keeps the swings swinging and arranges everything from bowling pins to birds in the shape of the symbol for infinity.

Nobody’s ever really explained the Spill. Was it an angelic visitation? A nanotech accident? A porthole opening from another world? Whatever it was, no one’s allowed in the Spill Zone these days except government scientists and hazmat teams. But a few intrepid explorers know how to sneak through the patrols and steer clear of the dangers inside the Zone. Addison Merrick is one such explorer, dedicated to finding out what happened that night, and to unraveling the events that took her parents and left her little sister mute and disconnected from the world.