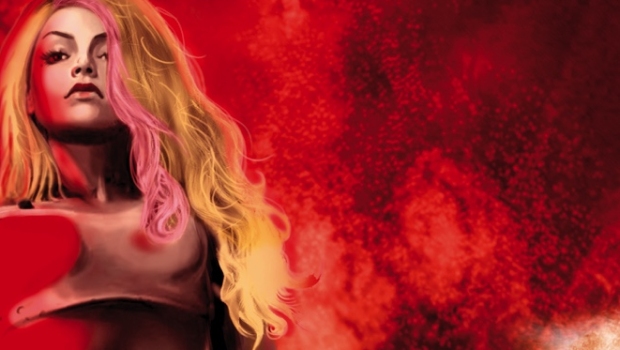 June 2018 starts with the return of beloved NANCY, who is stranded in a vast wasteland, looking to survive a demon chase while her Lucifer is calling for her! After 2 miniseries and a crossover with Erik Larsen‘s Savage Dragon apparently the story is long but over, just prior to her TV-debut! You can check out the pilot at IMDB, which was funded via Kickstarter.

Join Multi-Award winner creator/writer Juan Torres and discover why is being nicknamed “Spanish Master Of Horror”.

Discover up and coming superstar artist Abel Cicero before the rest of the world realizes his stunning renditions on paper. Drool over the coloring magick of Alexandra Thone, who will make Cicero shine even more!

It‘s a new start for Nancy in Hell! The wildest one in Hell and her trusty chainsaw are finally back, but it‘s not like you expected! After her death, Nancy awakens in Hell. A vast wasteland crossed by a single road, absorbing those who end there. Nancy just tries to survive the relentless demon chase. And, lost in the distance, the fallen angel -but still, an angel- Lucifer keeps calling her to rescue her.

After two miniseries and a crossover with Erik Larsen‘s Savage Dragon, there‘s still a lot to tell, prior to her TV-pilot debut!

“It‘s a new story, a jumping point in the Nancy story”, declared creator El Torres. “We‘re not going to disregard her past adventures. But now we will try to showcase a new perspective. Yes, there will be gore, but I‘m proud to say it‘s not an easy going story. Also, to have artists like Ariel Olivetti doing our covers it‘s a real rush for me!”

WHO IS EL TORRES

Juan Torres (Spain, 1972) is a comic book writer, who likes to scribble headshots when signing his award-winning books.

After several years working in the Spanish industry as editor, he wrote several miniseries that were successful in Spain; fantasy-themed, like Bribones (1999), Swordmasters (1999), Miserere (2005) and humor series, like Team Triumph (1998-1999) among several others.
In 2007 he released his first two miniseries in the United States. CVO: African Blood and Eclipse of the Undead, published at IDW. It was followed by his horror miniseries The Veil (2009), which was highly praised by critics and reviewers, followed by The Suicide Forest (2010), which received international awards and praises (Three 2012 Haxtur Awards!). The Suicide Forest was even optioned for a film.

At Image Comics he released the horror miniseries Drums (2011) and also Nancy in Hell (2011) and its sequel Nancy in Hell on Earth (2012), with which success readers and critics recognized him as “horror master”. After that, he decided to create his own independent company, Amigo Comics, where he released horror and fantasy series like The Westwood Witches (2013), Rogues! (2013-2015), Roman Ritual (2014), Ghost Wolf (2014) and Straitjacket (2016).

All his books have been released in Spain and Europe, including the 2015 graphic novel El Fantasma de Gaudí (Le Fantôme de Gaudi, or Gaudi’s Ghost), which have received great appraisal from critics and readers, receiving awards for Best National Work of Saló de Barcelona and Best Writer at Expocomic-Madrid (2016). Also, he is known for being the writer of El Rubius, Virtual Hero (2015-2017), a comic series based on the popular Youtuber. He also received the 2018 AACE Award, the Carlos Gimenez Award (Best writer), Jose Sanchis Award (best writer), and 2018 Salón de San Sebastián (Best book) for Straitjacket. At the moment of writing this, he‘s nominated alongside artist Jesús Alonso Iglesias for the 2018 Eisner Awards.

His work is defined by the use of well-known tropes of popular culture, always with a twist.

His books have been published in USA, Spain, France, Germany, Italy and Japan.