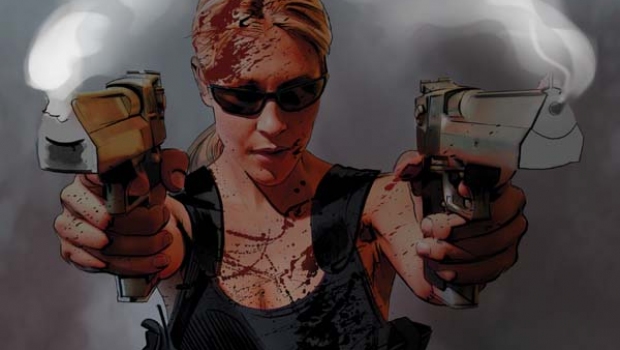 Dynamite Entertainment has provided C4S with a preview for their titles, in stores July 3, 2013.

The conclusion of the Fembot War in Russia, with the Bionic Woman caught in the middle! And when all hell is breaking loose in Mother Russia, will Jaime be forced to be Mother Fembot? It’s the hardest decision of Jaime’s life when her mind is the key to fembot salvation, but her finger is on the trigger of fembot annihilation!

Jen has taken her first solid steps on the road to revenge, and she knows that if she’s to survive, she has to see this through to the end. And that means finally dealing with Wendell Cortland, a man she’s known since she was five years old. There’s no going back now… She must set aside her old life and fully embrace what she knows she must become: Jennifer Blood.

Secret plans are revealed, and the tables begin turning…but Sonja and her allies may have woefully underestimated the Dark Prince. Blood and steel will play a part, as they always do, but this issue’s real battle will be won by the warrior with the strongest will.