C4S with a preview to Preview: Vampirella Strikes TPB - Comics for Sinners
Previews 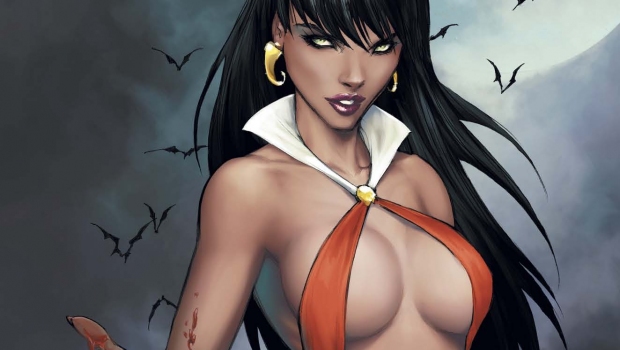 Dynamite Entertainment has provided C4S with a preview to Vampirella Strikes TPB in stores November 6, 2013.

For years, the raven-haired heroine Vampirella has hunted the world’s supernatural threats, all the while fighting back her own bloodthirsty nature. After a night out in Boston leads to particularly brutal violence, she seeks comfort in her Brownstone home… but discovers the most unexpected surprise of all. Angels have been sent to her by God — and they come asking for help! Enter Janus, a former soldier in the legion of Heaven, who skirts the line between the damned and divine. Only a fallen angel can navigate Vampirella through the seedy, demon-run underworld, where she hopes to find the source of an addictive, body altering drug derived from archangel blood. Will Vampirella’s mission redeem her… or will she uncover secrets so shocking that their discovery will damn her forever?

Collects issues 1-6 and featuring a complete cover gallery and more!

“An exceptional realization of this storied franchise… Highly Recommended” – UnleashTheFanboy.com
“Should not be missed!” – SciFiPulse.net