C4S with a preview to Preview: Vampirella: The Dynamite Years Omnibus Vol. 1 - Comics for Sinners
Previews

Dynamite Entertainment has provided C4S with a preview to Vampirella: The Dynamite Years Omnibus Vol. 1, coming to stores November 1, 2017.

In 2010, Dynamite Entertainment reintroduced readers to Vampirella, the most iconic heroine in the history of horror comics! Now, for the first time ever, the raven-haired monster hunter’s one-woman war on evil is collected in a massive Omnibus edition, an epic compendium of mystery, mayhem, and the macabre!

In hot pursuit of the infamous Vlad Dracula, Vampirella discovers a far-reaching conspiracy far deadlier than the Lord of the Undead himself.

Thrill to the action and intrigue with three complete storylines: “Crown of Worms”, “A Murder of Crows”, and “Throne of Skulls”, comprising issues #1-20 of the ongoing Dynamite comic book series, plus bonus stories originally presented in the first two Vampirella Annuals. 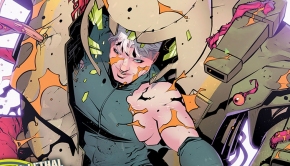