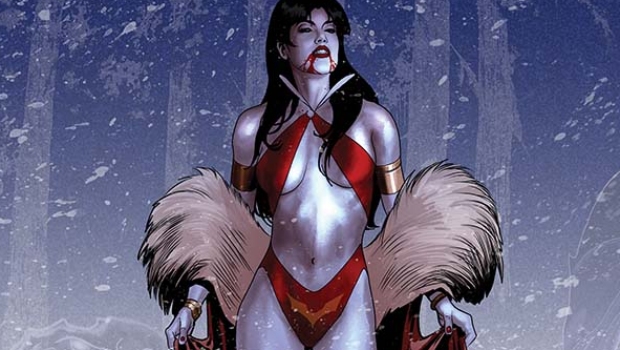 Dynamite Entertainment has provided C4S with a preview to Vampirella: The Dynamite Years Omnibus Vol 2 TP, coming to stores January 31, 2018.

Vampirella, a lethal beauty waging a war against the undead and demonic, must defend her recent actions to a tribunal deep within Vatican City. Hell is coming to Earth, and only Vampirella and her trusted allies can stop it!

Bad blood and old grievances are put aside when a deadly coven of witches threatens to unrival all time and reality, and Vampirella finds herself stranded one hundred years in the future. A vision of things to come forces our heroine to make a painful decision, forever altering her fate.

Then, what begins in the shadowy jungles of a voodoo island empire will reach its astonishing conclusion in Hell itself! Everyone’s favorite dark heroine will be pushed to the breaking point as her sanctuary is threatened, her love is at risk, and her own mother might just be her worst enemy after all! It’s a story of endings and beginnings!