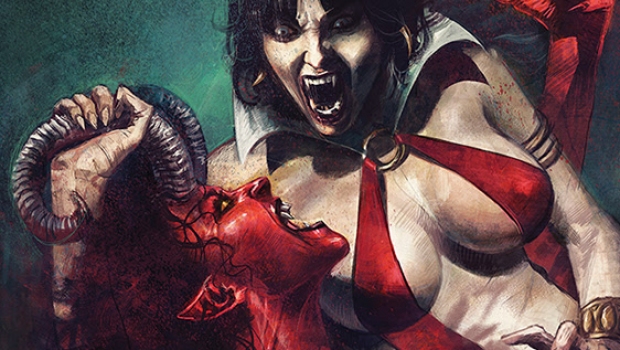 Dynamite Entertainment has provided C4S with a preview to Vampirella vs. Purgatori #1, coming to stores (pre-order via brick store for support!!) on March 24, 2021.

The unholy alliance you prayed would never happen!

For countless generations, the fight between good and evil has been fought, as much behind the scenes as in plain view. Unbeknownst to the world at large, one force has stood as a safeguard against the potential triumph of evil and the unleashing of the apocalypse: The 36. Now, someone is after them, a creature of evil known as Purgatori, and the only thing standing in her way is Vampirella.

So with all of existence hanging in the balance, what could possibly bring these two enemies to join forces? Hint: Whatever it is, it must be really bad.