Dynamite Entertainment has provided C4S with a preview to Xena Vol. 2 #5, coming to stores August 17, 2016.

writer: Genevieve Valentine
artist: Julius Gopez
cover: Jenny Frison
incentive cover: Jenny Frison (“virgin art”)
FC • 32 pages • $3.99 • Teen+
The daring rescue of Chilapa and the captive Harpies has made Xena into Rome’s newest, greatest enemy… just like old times! It will bring the might of an empire to Xena’s doorstep… and Gabrielle is going to stop it, by any means necessary. All roads lead to Rome! 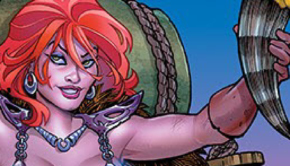