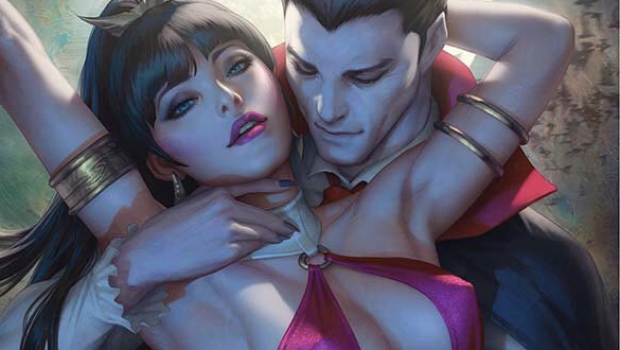 Dynamite Entertainment has provided C4S with a preview to Invincible Red Sonja #7 + Sheena #3 + Vampirella/Dracula: Unholy #2 , coming to stores (pre-order via brick store for support!!) on Jan 26, 2022.

Sonja looks like she will need all the help she can get as she tests her skills of survival in a Godless place where only the strongest survive.

Sheena: Queen of the Jungle #3

The Queen of the Jungle Returns! Featuring an all-star creative team and the most amazing roster of cover artists this side of the jungle! The thrilling adventures combines the classic elements of the legendary character along with a modern sensibility that will make it the perfect debut for fans new and old! And lookit those covers: Linsner! Parillo! Besch! Suydam! Cosplay!

Sheena faces the rogue beast that may – or may not – be responsible for all the death and destruction in the Mega-Park. But, how can she trust the very people that sent her in? short answer: she can’t, making the danger both man and animal-made! Oh, and they maty be coming after her from the spirit world as well!

Jurassic Park meets Predator meets The Hunger Games. Sheena is Queen of all.

Kidnapped by dark forces while on their honeymoon, Vampirella and her new husband Matt are confronted with and tempted by the darkest sides of themselves as time runs out for them to complete the blood rite required to prevent the resurrection of the deadliest threat the world has ever known.

Meanwhile, back home, Matt becomes the target of a murder investigation as his secret life is exposed.