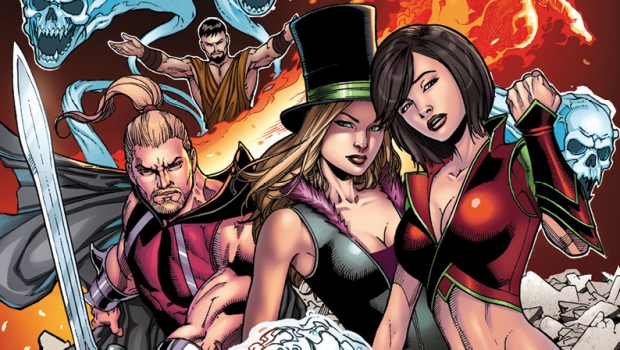 Zenescope Entertainment is offering a nice collection of TPB’s this month and has provided C4S with previews.

After rebalancing the universe, Sela reunites with her estranged daughter, Skye. Teamed with Belinda and their mentor, Shang, they set out to help highborn teens hone their unique abilities with the hope that one day they too will fight against the evil forces that threaten Earth.

The carnage and the surprise deaths in this series combined with the action and the amazing art, make this series the perfect follow up to Grimm Fairy Tales #100 and the Age of Darkness.

The Dark Queen has merged Earth with the Realms of Wonderland, Myst, Neverland, and OZ. As the worlds crash together, she and the Dark Horde enslave millions of innocent beings whose only hope rests with the Guardian of the Nexus, Sela Mathers.

This book collects issues #1 – #6 in the Realm War series.

Robyn and Marian set up shop as private investigators in New York City. Trying to help those in need brings the attention of The Cabal, a shadowy organization intent on taking the archer down!