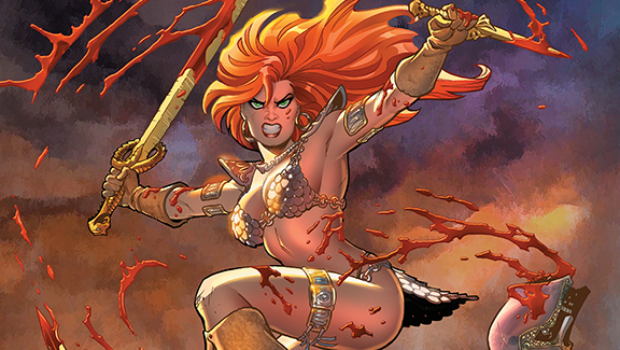 Red Sonja 2019: Russell and Colak Reawaken The She-Devil Of The Hyrkanian Steppes

In Red Sonja, Russell and Colak bring forth the tale of Tomyris, a world conqueror possessing a massive army and a fatal prophecy. A bastard sorceress craves revenge. And a fearsome red-haired warrior is made wartime ruler of a homeland set for decimation. No man knows the place of her birth, nor where she learned to wield a sword to shame many a male. They know only that she is called The She-Devil Of The Hyrkanian Steppes. That, and RED SONJA.

“I’m a huge fan of ancient history because there’s no clear line where the history ends and legend begins, so in a way, all ancient history is a work of fantasy,” stated author Mark Russell. “I really wanted to write a fantasy title that allowed me to work in some of the incredible stories and themes of ancient history, in particular, the story of Tomyris, the bad-ass Queen of the Steppes, and it’s hard to imagine a better character to tell that story than Red Sonja, the bad-ass Queen of Comics.”

“Mark Russell’s take on Sonja is steeped in greater-than-fiction history, with a humongous worldview. Sonja will be the focus, but what’s exciting is to see the lore and world-building that Mark’s infusing into this new ongoing, to create a fusion of modern storytelling while placing big classical elements front and center,” added series editor Nate Cosby. “The rest of the creative team is in perfect harmony with the approach…artist Mirko Colak is drawing grandly scaled perspectives, color artist Dearbhla Kelly is bringing a bold painterly palette, and letterer Hassan Otsmane-Elhaou is styling beautifully rugged balloons and effects required for a fantastic fantasy comic.”

“There is no special mystery why I accepted the offer from Dynamite. One name, basically, was enough: SONJA,” said series artist Mirko Colak. “In my country, Serbia, Red Sonja is very popular and I have to say, I am very familiar with Sonja’s world.”

“Red Sonja is a cornerstone character for our publishing line,” added Nick Barrucci, CEO and Publisher of Dynamite Entertainment. “We’ve been very fortunate to tell so many of her stories. The passion that Mark brings to the character paired with Mirko’s art is perfect for this series.”

The first issue of Red Sonja delivers a wide selection of cover variants, providing fans and retailers a chance to collect the whole set! The cover artwork features the talents of Amanda Conner (Harley Quinn), Joseph Michael Linsner (Vampirella), Christian Ward (Thor), and Frank Cho (Hulk), and a cosplay cover respectively. Additionally, an exclusive Atlas Edition signed by writer Mark Russell will be available which includes a Certificate of Authenticity. A blank Authentix Edition will be available as a variant for Red Sonja #1, featuring the same great story, but with a blank cover for you to get your favorite artist to draw their own take of the She-Devil with a Sword, Red Sonja!