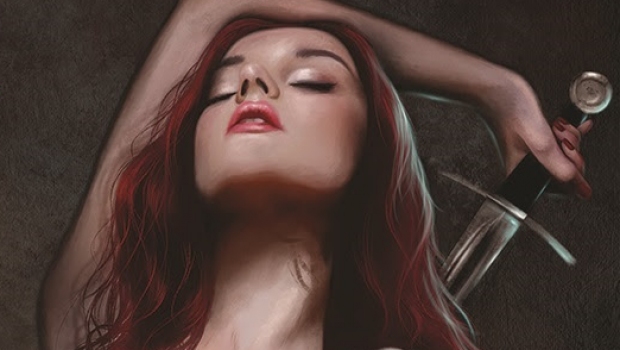 The She-Devil With a Sword is striking out in a prestige new series by Amanda Conner and Jimmy Palmiotti with May’s Invincible Red Sonja!

“I have loved Red Sonja since I was about 12 years old,” said Amanda Conner. “I wanted to grow up to be her at one point, but it’s just not the Hyborian Age anymore. Which I guess is a good thing.”

Jimmy adds, “Red Sonja is one of my favorite sword and sorcery characters ever since I bought her first appearance from the candy store.”

The comic book power couple bring their trademark action and wit to every character they tackle, from Power Girl, to Jonah Hex, to Watchmen, and more. The duo took on Harley Quinn, a character who hadn’t had a series in years and catapulted her popularity to the “fourth pillar” alongside Batman, Superman, and Wonder Woman; and laid the groundwork for multiple media adaptations, including the critically acclaimed show on HBO Max and the character’s portrayal in multiple films.

This new journey for the fiery-haired heroine is chock-full of pirates, mermaids, princesses, political intrigue and much more. It’s a can’t-miss celebration of sword and sorcery action.

The series is wrapped in beautiful covers by Amanda, adding to her growing library of iconic takes on the character. She’s joined by a top flight crew of fellow cover artists including Joseph Michael Linsner, Carla Cohen, the Dynamite debut of Celina, and a limited edition “outrage” variant by Frank Cho.

“Amanda and Jimmy have built up an incredible fanbase and are two of the best-selling creators in the industry. They took Harley Quinn to new levels and helped the title become a juggernaut at DC,” said Nick Barrucci, Dynamite CEO and Publisher. “They also happen to be two of the nicest, most talented and hardest working people in the business as well. We’ve talked about finding the right project together for the last two years, their schedule opened up, and it is with one of our signature characters. I’m so happy that they are tackling Red Sonja and that they have such a passion for the character.”

INVINCIBLE RED SONJA #1 is solicited in Diamond Comic Distributors’ March 2021 Previews catalog, the premier source of merchandise for the comic book specialty market, and slated for release in May 2021. Comic book fans are encouraged to preorder copies of the issue with their local comic book retailers. It will also be available for individual customer purchase through digital platforms courtesy of Comixology, Kindle, iBooks, Google Play, Dynamite Digital, ComicsPlus, and more!