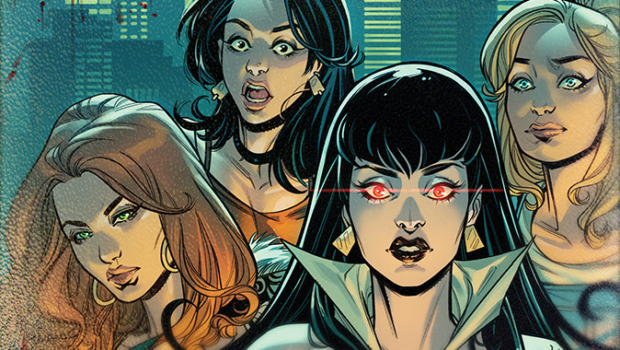 Dynamite and Archie Comics announce the extension of the Red Sonja & Vampirella Meet Betty & Veronica series, doubling from 6 issues to 12!    The response from fans, retailers and critics on this series has been an overwhelming hit! Who could imagine that teaming up four of the most iconic female characters in the medium would be so popular? Jokes aside, Dynamite is beyond grateful for all the positive reactions to this book and the perfect way to give back was simple – make more of what people love!

The same beloved creative team, top to bottom will pick right up with issue 7 this November. Amy Chu (Poison Ivy, Green Hornet) continues her victory lap writing Red Sonja following her acclaimed run with Carlos Gomez. Plus her further exploration of Vampi and Riverdale’s leading ladies. Maria Sanapo (Sheena Queen of the Jungle, Charmed) will keep contributing some of the sharpest and cleanest artwork in comic books. While colorist Vinicius Andrade and letterer Taylor Esposito keep raising the bar. Fans will also be excited for more covers from the existing cast of diverse styles. Including Fay Dalton, Robert Hack, Laura Braga, Dan Parent and Cat Staggs.
“I literally just saw the sales numbers for the first issue and my jaw dropped! I’ve been completely bowled over by the amount of support for this series,” said writer Amy Chu. “Of course I’m excited to continue with the series as long as the fans want. This is my first time working in the Archie universe, and it’s been non-stop fun working with Maria. Expect even crazier antics with this next arc!”