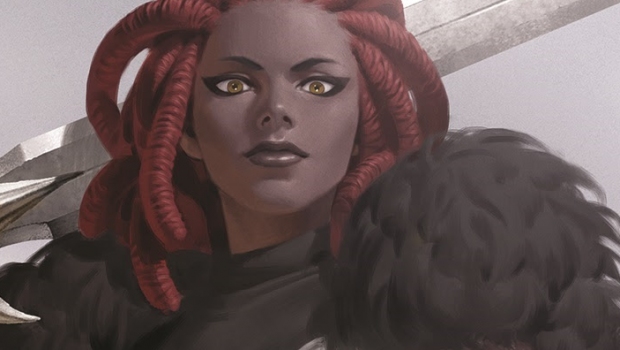 Behold… the daughter of fire! Red Sonja rescued and helped raise Sitha the Red from a fate eerily similar to her own. Now worldwide superstar creator Mirka Andolfo (Mercy, Unnatural) is expanding the breakout character into her own spotlight series coming this May!

Sitha’s village was ransacked and brutalized by bandits, most of her family slain, not too unlike her adoptive mother Red Sonja’s origin. Further, she was posessed by the spirit of the flame, Xamul. Through a perilous journey, Sonja was able to protect the young girl and teach her the ways of the warrior.

A decade has passed since those pivotal events in the flagship ongoing Red Sonja series by Mirka Andolfo. Sitha is now grown up, getting by as a fearsome young bounty hunter across the lands of Aquilonia. Her whole life is about to be upturned once more, when a figure from her past returns to loop her into a suicide mission. And how does Red Sonja factor in..?

The sensational Mirka Andolfo writes this series starring the character who first appeared in her Red Sonja (2021) #1. She’s joined by fellow Italian artist Valentina Pinti, for what is sure to be a breakout project for the rising star.

Andolfo and Pinti both contribute gorgeous covers themselves to the title. In addition to them, they’re joined by Junggeun Yoon and Paulina Ganucheau. Plus, a cosplay cover featuring Gracie the Cosplay Lass.

RED SONJA: RED SITHA #1 is solicited in Diamond Comic Distributors’ March 2022 Previews catalog, the premier source of merchandise for the comic book specialty market, and slated for release in May 2022. Comic book fans are encouraged to preorder copies of the issue with their local comic book retailers. It will also be available for individual customer purchase through digital platforms courtesy of Comixology, Kindle, iBooks, Google Play, Dynamite Digital, ComicsPlus, and more!