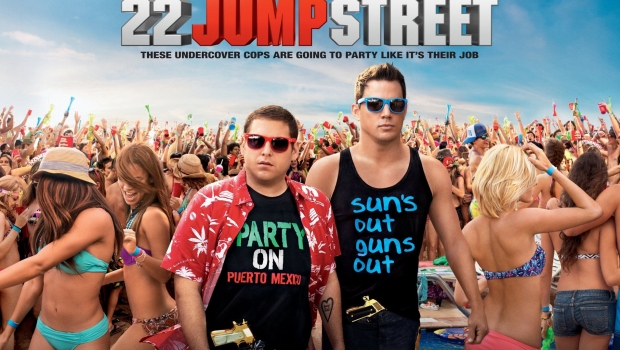 After making their way through high school (twice), big changes are in store for officers Schmidt (Jonah Hill) and Jenko (Channing Tatum) when they go deep undercover at a local college. But when Jenko meets a kindred spirit on the football team, and Schmidt infiltrates the bohemian art major scene, they begin to question their partnership. Now they don’t have to just crack the case – they have to figure out if they can have a mature relationship. If these two overgrown adolescents can grow from freshmen into real men, college might be the best thing that ever happened to them.

So far Sony telling us what it is!

What makes this movie so incredibly watchable is the utter nonsense of the two main characters. Hill and Tatum are making doofus moments much like in the first movie but sequels sometimes sure are better. They both seem to truly have fun together in- and outside of the movie.

And whether it is a college, a party or a football-game for them to get undercover with, it will all result in a massive hysteria due to these two clumsy fools!

What makes it extra special for the folks old enough to remember seeing the Johnny Depp version on TV two decades ago, is the fact that there are a couple of wink/nudge to those original yet less hilarious TV-series.

Verdict: if you wanna have fun with a GOOD comedy, stop looking and get this one asap! And do NOT forget to get the BluRay because the extra footage as well as the extra’s are worth it!