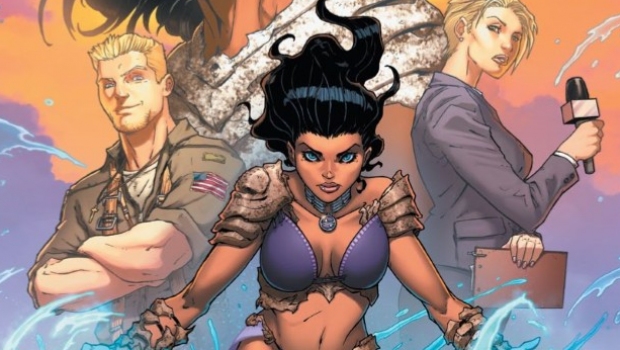 “You can definitely expect fireworks from FATHOM. It goes outside the box more than most titles you’ll find at The Big Two right now. If you like something a little different, a little sexy, a little more 90s, this might be the series for you.” – Blake Northcott. 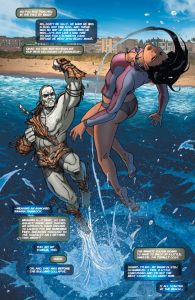 Move over Sub Mariner, Triton, Aquaman. Your male dominated world of sea-faring superheroes is about to be crashed! Here comes Michael Turners “Fathom.” Finally, a female sea-faring superhero. This is issue one of volume six, and the author is also a woman! Blake is one of those names that can belong to a man or a woman, so, to prove to you that this is a woman writing I submit to you a picture of the one and only comic book writer Blake Northcott (plus showing a picture of a beautiful, sexy blonde always gets fanboys attention anyway.) Now to the synopsis: Here’s a fun title filled with catchy quotes and a lot of action. The issue begins with the hero being knocked 600 feet into the air by a Blue meanie water breathing bad guy. Its narration reveals that this is something that happened in the character’s recent past, she’s describing the incident to a friend. It seems that her ex-boyfriend had her investigate a strange noise coming from a dark sink hole, when Aspen went to investigate, the blue meanie, who claims that he’s a god, got upset. An argument ensues and the blue meanie pulls out a glaive (Blake must have seen the movie “Krull,” lol.) and attacks her with it. Aspen changes her density, meaning that the glaive should have passed right through her but it nicks her anyway. She suspects that this character isn’t actually one of her kind, but someone different, though with similar powers and underwater breathing ability. I loved how the battle became unpredictable with the character’s powers not working as they were supposed to. 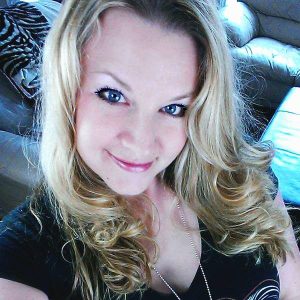 Blake Northcott has written several novels and comics and this is her latest offering from Aspen Entertainment. She keeps the action flowing and the reader constantly guessing who the blue meanie is. She masterfully manages to create a page turner as when we expect one thing to happen, something totally different evolves in the tale. One of the aspects I loved about this story is the reaction from mainstream and social media to the incident. We see people supporting Aspen and others dissing her. It is very representative of today’s hostile media climate. This happened in San Diego but there are people as far away as England commenting on it as if they were actually there to witness it. Her story telling is entertaining and educational as she subtly teaches us not to believe all the crap on Facebook and Twitter, or even the news media itself. Great fun, loved this issue.

Marco and Mark compliment Blake’s words nicely. A well-drawn issue in the Aspen style. Some incredible illustration brings the characters to vivid life. One of the best scenes in this title is when the blue meanie goes berserk in down town San Diego. The opening splash page describes the tone for the entire issue as our hero seems helpless against the blue meanie. The art is spot on for this story and very bright, with bright colors. It helps make this issue an easy read. 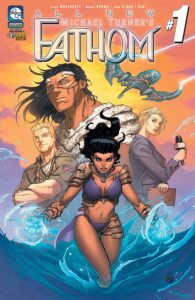 It’s a captivating cover to say the least. Our hero is in the middle about to use her water powers. She’s slouched forward, ready to do battle and she’s stirring up the ocean waves beneath her. Behind her are some of the supporting characters in her universe. There’s a spaceship in the right-hand corner and it’s firing some kind of lasers. It denotes the action that’s inside and should definitely catch the eye of the comic store surfer. Nicely done.

The action builds to a gut-wrenching climax as Aspen and the blue meanie take the battle away from the shore and the San Diego citizens into the deep blue ocean itself. A television helicopter decides to follow them to get the exclusive, only to put itself in harm’s way. Aspen notices a tatoo on the blue meanie’s chest and decides to see if it means anything. Her search reveals that it’s not just there for decoration. I’m not going to reveal the blue meanie’s secret here, but it leads to an excellent build up and great expectations for the next issue…To be continued. ****