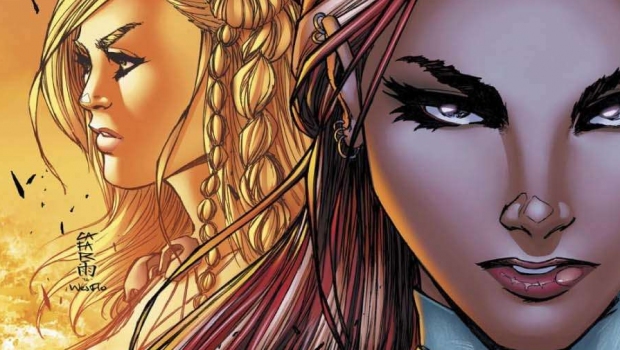 The Elite council failed to act on the threat of the Typhos. They even eyed Aspen Matthews suspiciously to add insult to injury. The social media got a good look at the fight between our Sea-faring Superhero and Typhos. And, of course, the world had to add it’s two cents worth about an issue they had no idea of what was going on, and share their expert opinion on social media, what else do people with too much time on their hands do?

Blake Northcott’s sharp eye and intrinsic wit shines forth as she continues this tale in issue three. We see Aspen and Ty in the privacy of their own home as they receive a surprise guest(s). Aspen thinks quick and teleports Ty and her dog to the bottom of the ocean. A “Hello Down There” moment as the three wind up on Muria, the capitol city of the blue at the bottom of the ocean. Ty is definitely a fish out of water (is that a reverse pun?) as she begins to suffer from a form of decompression sickness. Aspen regrets her actions, feeling that Ty would rather be home, but Ty reassures her that she would rather be with her than anywhere else, a touching moment in this issue to say the least. Good fun.

Blake Northcott’s writing gets sharper every issue. A good blend of pathos, friction, and wit mixed in with the action of this issue. We see the main character’s feelings for each other shine forth. We also get a sense of tension between Aspen and her companions from her home city as they view Ty and her dog with a nervous vibe. Meanwhile General Somervell is about to burst a blood vessel as he wants to find Aspen and get to the bottom of this mystery. Somervell bears a striking resemblance to William Hurt’s Thaddeus “Thunderbolt” Ross, but I’m sure the resemblance is purely coincidental. Northcott increases the tension on every page as the enemy begins to turn its nefarious plan on Aspen and the pressure mounts both from the surface world and the undersea world grows…To be continued.

Marco and Mark continue to improve on their artistic duties for this issue. Creating two universes for our protagonist to dwell in. The underwater capitol city is breath taking and when we get to a battle between two underwater denizens at the end of the issue, the pictures are pure compliment to Blake’s words. Showing the battle as it escalates into something far sinister than we could have imagined, great work.

The story gets more exciting with each issue, a few good plot twists to keep us guessing and a great amount of character development to keep us interested in our protagonists. We want them to succeed they aren’t just two-dimensional hero’s. Our villains need a bit more fleshing out so we can relate to their ultimate goals, but so far, they are menacing enough to keep us coming back each issue and I’m sure all will be answered in the issues to come. I love the direction this series is going in. I can’t wait for issue four!