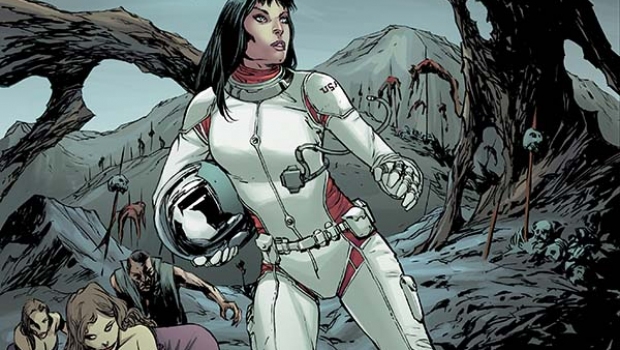 In 1969, a scantily clad vampiress from a dying planet called Drakulon crash-landed on Earth, possessing powers and abilities far beyond those of mortal men. Well, naturally she had those—she was a vampire from outer space! That bloodsucking immigrant was, of course, Vampirella, and with her arrival horror comic heroines were never the same.

Unfortunately, in the 1990s, Vampi’s celestial origin seemed too quaint for writers heavily influenced by Alan Moore’s and Frank Miller’s grim-n-gritty tales of darkness and ultraviolence, and that attitude remains in place today. A vampire from outer space? Nonsense—that’s just too silly to believe! Now it turns out that Vampirella’s actually the daughter of Lilith, mother of all monsters, and Drakulon isn’t a planet, it’s a suburb of hell.

Which brings us to Altered States: Vampirella, by Vampirella series scribe Nancy A. Collins (Swamp Thing, Sunglasses After Dark) and artist Francesco Manna (Vampirella #100, Army of Darkness #1992.1). According to Dynamite Entertainment, Altered States is a line of one-shot specials that star Vampi, Red Sonja, Doc Savage, and The Shadow, in which “the familiar becomes the unfamiliar and the known becomes the unknown.” Basically, it’s Dynamite’s attempt at emulating Marvel’s What If? or DC’s “Elseworlds” stories: tales set in alternate universes, not part of the character’s regular continuity.

So in Altered States: Vampirella, we get a spin on her vampire-from-outer-space origin. Here, she’s human astronaut Ella Normandy—an identity that Vampi used in her Warren-era days that’s been revived by Collins in the main series—who’s a crewmember of the Earth spaceship Arthur Clark. (Note to Dynamite’s editors: the correct spelling of the name of one of science fiction’s literary giants is Arthur C. Clarke.) Her three crewmates are Captain Forrest (named for Vampi creator Forrest J Ackerman), Commander Sutton (named for original Vampi artist Tom Sutton), and Commander Wu (named for…no female creator at Warren. What, no love for former Warren editor Louise “Weezie” Jones [now Simonson]?).

On their way to Venus, the crew encounters an alien artifact floating in space: a ringlike device that turns out to be a wormhole portal (oh, hi, Interstellar!) that pulls the Clark through and deposits it light-years away on Drakulon—where it crash-lands. Soon, Ella finds herself alone on a planet of vampires, where the rivers flow with actual blood and water flows in the Drakulonians’ veins—life-sustaining water that Ella needs to survive.

Okay, so maybe the hell-spawn origin isn’t the worst thing I’ve ever heard of… 😉

Bottom line? If you’re looking for a fun spin on Vampi’s “true” b-movie origin, combined with good art, then Altered States: Vampirella may be what you’re looking for. However, if the story had tied in some way into current Vampirella continuity—like the debut of Vampi’s evil sister, Draculina, in the concluding issue of the recent Vampirella: Feary Tales miniseries, which ties into the ongoing series—then this one-off tale would have been an essential read for longtime fans, instead of just an interesting “Elseworlds” take. Still, it’s worth giving it a look.