Review And Trailer: Sally Of The Wasteland #1 – Comics for Sinners

Review And Trailer: Sally Of The Wasteland #1

The Fall has happened and on the rotten remnants of society Sally is ready to save the life of her beau, who is not even hers yet! Guys that cannot take a hint are not even obsolete after Armageddon, so it seems.

Sally helps out at a bar with Bertha, her loyal 12-gauge sidekick and when a Kat drops on the stoop, Sally and her mates want to help Kitty-Kat for promises of a power source capable of putting civilization back on the map.

But Sally does not care about anything else but Tommy, so do not expect a heroic strong female lead just yet, dear readers! Perhaps the combination of Kat and Sally will mark for more fun then we can predict so far, though, because fun is to be had! The oneliners are abundant and the crazy just got freaky, as writer Victor Grishler shows that Armageddon can be a fun place after all, even if that might show New Orleans as the centre of all good and evil in this new world!

I for one am turned into a fan, as I immediately fell in love with both courageous Kat as well as shallow but great Sally, who takes comedy relief up a notch when swinging around her Bertha.

Aiding Grishler in this apocalyptic adventure is artist Tazzio Bettin, who sets out to make Grishler’s tale even more juicy, with delicious curves on every page and inexplicable mayhem at every turn. Bettin knows how to show action as well as suspense, booty as well as gore. Titan has launched a winner with this tale, that is for sure.

Review: Sally Of The Wasteland HC →

ComiXology Sale: Sally Of The Wasteland by Victor Gischler and Tazio Bettin → 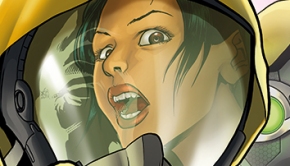 Preview: Sally Of The Wasteland #5 →