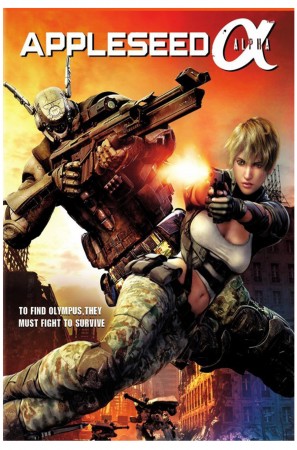 APPLESEED ALPHA is based on the comic book series by the creator of ´Ghost in the Shell´ and revolves around a young female soldier Deunan and her cyborg partner Briareos who survive through the post World War 3 apocalyptic New York in search of human’s future hope, the legendary city of Olympus.

This is the 3d movie in a row, originally called ´Appurushîdo´ in its first editions. The stunning visuals are the main attraction from the very first movie and this still reflects this last movie in every way. The swaying hair, the explosions, the action, the facial expressions and the utter details make this one a joy to look at.

Deunan and Briareos are a great team-up and their sharp and witty dialogue is filled with emotional undertones. The strong Briareos is a cyborg with a mind of his own and Deunan is a female mercenary whose looks indeed does kill, so it seems.

When the both of them partner to do a run for crimelord Two Horns (which is on its own a character who needs more airplay!!) they encounter some folks who claim to have come from Olympus, which would be the last stronghold of society. As the team tries to get to Olympus, they encounter evil cyborgs bend on destroying all that is human and Deunan and Briareos (with some awesome help by Two Horns) just barely save the world.

As said before, the visuals are stunning and the story is intriguing, the characters are really and honestly very interesting… but…. there is a but…

I am missing something. A depth of some sort. Perhaps because I was unaware of the previous backstory both in video and in comics, to really appreciate this newest visual experience or just perhaps the movie indeed is missing a lot of explanation. How did the Deunan and Briareos meet up, why the over-acting at times, how are they getting food, where is the underlying agriculture needed to support any living being, why do the baddies want to go Skynet on all, and why does the movie not really make me care?

The art is stunning, the action sublime… still a huge thumbsup all in all!