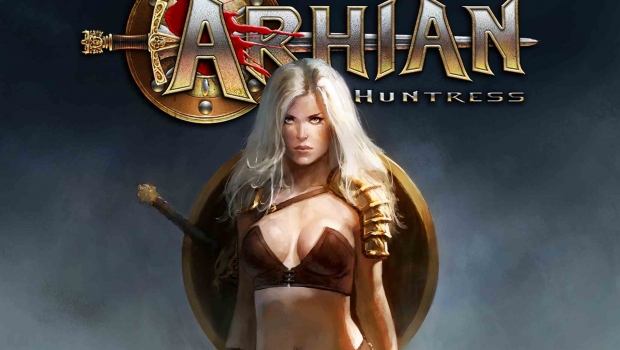 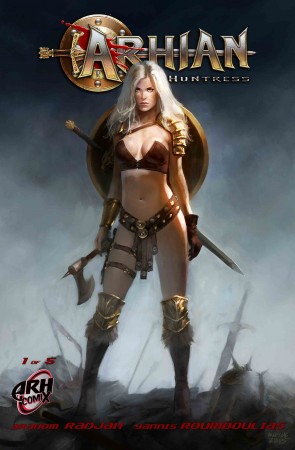 Know ye, o Prince, that somewhere in the gray lands between Robert E. Howard’s Red Sonja and Frank Thorne’s Ghita of Alizarr there rode Arhian the Head Huntress: swift of sword, voluptuous of form, with hair as yellow as a sunrise. And her blood-soaked adventures were found in the pages of a new comic-book miniseries…

Arhian, Head Huntress #1, written by Arahom Radjah, Abraham Kawa (Queen of Vampires), and Ben Bishop, illustrated by Yannis Roumboulias, and published by newcomer ARH Comix, treads familiar territory for sword-and-sorcery fans, especially those with a fondness for a certain She-Devil With a Sword. “In the years after the third Arkhorian war,” as the back cover copy tells us, a warrior woman named Arhian “cleaved her way into legend” as a bounty hunter and mercenary. This debut miniseries presents one of her adventures, well after she’s established her reputation as a hardworking, hard-fighting, hard-drinking badass. At face value, she’s a blonde Red Sonja, from her skills as a fighter to her minimal costume (leather, not chain mail), but Arhian manages to avoid falling into the realm of pale imitations. Arhian stands on her own—although, as with Arkhalla, the star of ARH’s recent dark-fantasy comic Queen of Vampires, comic-book Arhian is based on a statue (with removable magnetic top!) produced by ARH’s sister company, ARH Studios.

Storywise, I’m not certain why it took three writers to kick off Arhian’s adventures—in Hollywood terms, the greater number of writers involved in a project usually indicates a diminishing return in quality—but Radjah, Kawa, and Bishop masterfully carry out their collaboration. They make Arhian a likeable rogue who’s cynical and sarcastic and sly, but all business when it comes to collecting her bounties. And after an introductory sequence in which we see how Arhian operates—taking on four thugs so she can apprehend a multicount murderer and rapist—we get to the main plot of the miniseries, in that Arhian is hired by a nobleman to rescue his twelve-year-old daughter from kidnappers. The pay is good and the cause is just, so Arhian signs on, but if Radjah, Kawa, and Bishop follow the steps of that familiar sword-and-sorcery path, it’s a good bet there’s a darker reason for why the nobleman wants his daughter returned. We—and Arhian—will just have to continue on the journey to find out.

Artwise, Roumboulias does an excellent job bringing this gritty, rough-and-tumble world of thieves, murderers, and rogues to four-color life. As expected in such a fantasy setting, his barbarians are downright ugly, his women strikingly beautiful, and his action sequences brutal as hell. And I’m pretty certain he had a well-known Cimmerian making a cameo appearance to check out Arhian about halfway through the issue…

Bottom line? With its ass-kicking, scantily clad heroine and setup for a pulp-infused rescue-mission storyline, Arhian, Head Huntress should appeal to both bad-girl fans and lovers of classic Red Sonja adventures.

Now on sale at ARHComix.com