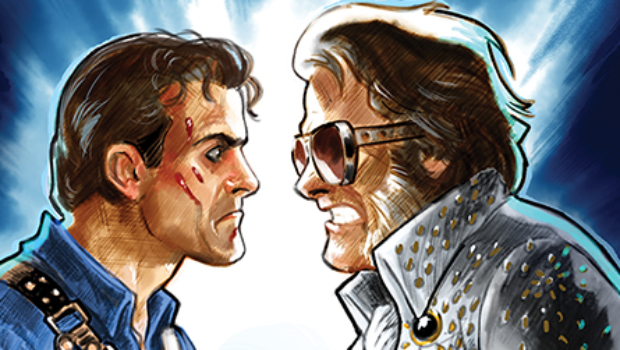 Bruce Campbell fans will be ecstatic when they see this comic book. Two of his most iconic characters in the same issue!
Since the cancellation of the Ash TV series and Bubba Ho-Tep sequel, the only way we can enjoy these adventures is through the medium of comic books! This issue opens with an incredible splash of Ash and E attacking this issue’s bad ass antagonist (no spoilers)

Scott Duvall clearly knows his Bruce Campbell. He opens this issue with Ash driving to the very nursing home that housed Elvis, whom the staff thought was impersonator Sebastian Hoff. He confronts the same nurse that was in the movie and fans will get a chuckle out of the nurse trying to convince Ash that Elvis is dead. Mr. Williams is stubborn and continues to search until he finds the King of Rock and Roll! This isn’t just Elvis but Bruce Campbell’s interpretation of Elvis. He’s grown cold and sarcastic. An Elvis that regrets trading places with the impersonator Hoff only to watch Hoff die in August of 1977 and has been put in an institution after failing to convince anyone that he’s the real deal. Great stuff includes the first confrontation between Ash and E. Also, the banter between Ash and Nurse Ratchet.

Vincenzo Federici is the perfect compliment to Duvall as he doesn’t just draw Elvis Presley, but Bruce Campbell’s interpretation of Elvis. His panels are all over the place bringing a turbo charged tale into the spotlight. His Ash is one of the most spot on in the history of Ash Williams in comics. Highlights include the first meeting of Ash and Elvis also the fight between protagonists and antagonist.

These iconic characters were meant to meet in some medium or other. Even though both were played by Bruce Campbell, the characters are not interchangeable, each having their own distinct personality. It would be great if Sam Raimi and Don Coscarelli could discover this series and join forces to bring it to cinematic life! Two geniuses in the field of horror comedy! This issue is far better than most first issues of a series that must establish the tale for the rest of the series. I loved it! **** (9.3 rating)