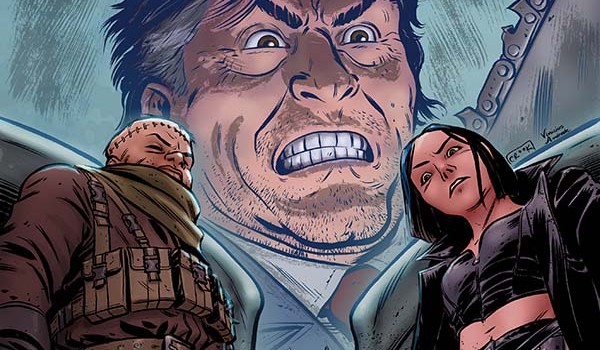 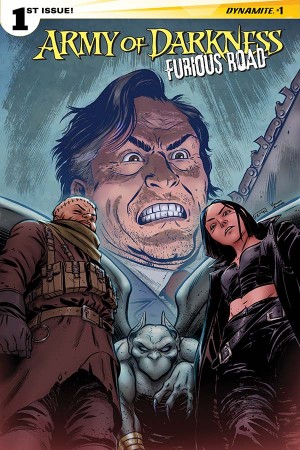 I love Sam Raimi movies! I wrote Last Rites: the Return of Sebastian Vasilis which is in production now, with Sam Raimi in mind to direct and Bruce Campbell in mind for Karl Vincent, however I can’t afford them. That’s not bad though because director Jeffrey Crisp of Crisp Film Works shares my vision for what this film should be about and I get to play my own character in the film. Evil Dead and Army of Darkness were big influences on me as I set out to write the greatest horror comedy in the history of the genre, so it is with great pleasure that I hold in my hand Army of Darkness; Furious Road.

The action kicks off in true Sam Raimi fashion with a machine gun totin’ nun! I can tell from the first few pages that the author, Nancy A. Collins, knows her Raimi cinema. The title Furious Road reveals that this issue is also an homage to George Miller and the Mad Max franchise. Both Raimi and Miller like to through tons of action into their franchises, Raimi leaning more towards humor and horror while Miller takes his franchise a bit more seriously and leans to sci-fi rather than horror, a mash-up of these two exciting genre’s should prove to be exciting; in the right hands.

The action takes place mostly in front of an S-Mart convenience store. Our heroes’ are a Magnificent 7 which includes an Errol Flynn type with a hockey stick, the aforementioned Machine gun totin’ nun, A muscle bound priest, a blue haired lady with a pitch fork, what appears to be the Frankenstein monster, another sexy lady with a mallet and Ashe. The set up is brilliant and I am looking forward to the continuation next issue.

In true George Miller fashion there isn’t much dialog, in fact, in this issue, there isn’t any dialog. Our (anti) heroes’ are trying to leave Detroit but their efforts are thwarted by a group of zombies and monsters. Kewber Baal’s art captures the essence of the scene and brings us into the action in a fast paced chaotic way that makes this an intense and exciting read. His Ashe is at once angry and confident, even if he isn’t sure who the enemy is. Bruce Campbell is channeled here with an impressive nod to the actor. The creative team would make both directors proud. ****