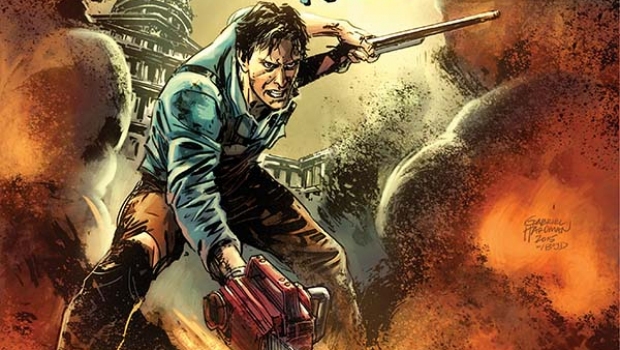 “…I bid you enter of your own free will.” – Dracula

Sam Raimi and George Miller collaborating on a feature film! Army of Darkness: Furious Road should be that film. A Sci-fi/horror mash up on a scale that hasn’t been seen since the first Alien movie. I would be so Down with that. It hasn’t happened yet, but it could. In the meantime Dynamite Entertainment has seen fit to give us fan boys what we want through the medium of comic books. God love ’em.

Ashe appears to wake up in Hell, but is he dreaming? The magnificent 7 from issue 1 are demanding that Ashe gives them the Necronomicon, he refuses, saying he doesn’t do business with monsters (Wolf man and Frankenstein’s to elaborate.). Then a former colleague of his talks about the good this group is doing against what she calls deadites (a zombie by any other name.)

SPOILER: Ashe leads them to the Necronomicon, which he hides inside of a fruitcake canister, which is why the Wolf man couldn’t pick up the scent. The witch must cast a spell at a place called Alive if it’s to work, so, instead of just giving them the book, Ashe joins them on their quest. It’s hell to get out of Detroit now-a-days.

This one has it all Werewolf bikers from hell, The Prince of Darkness, or Dracula to the laymen. Dracula seems to be showing up everywhere, including “Last Rites: The Return of Sebastian Vasilis” (shameless self promotion.) and Deadites, Deadites a ton of Deadites.

Nancy A. Collins brings us more humor and horror on every page. Incredibly well written with her tongue still planted firmly in her cheek. The pacing is fast and brings us to the edge once again. Kewber’s art is spot on. From the get go his splash page brings us directly into the action and never lets up. He’s having fun with this story and it shows forth in a fantastic way. One of the best titles out there to be sure.