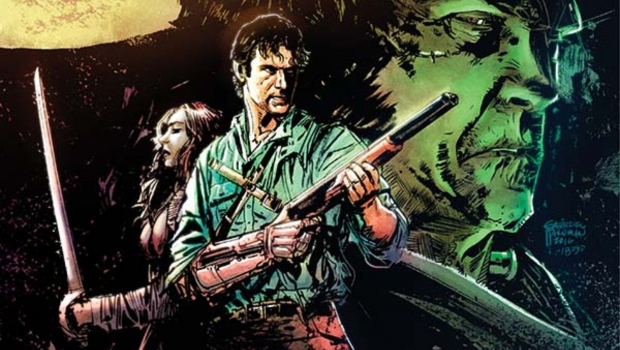 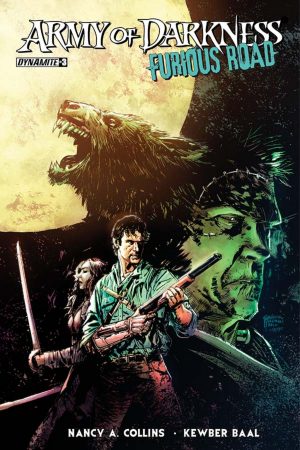 “…it’s better you surrender your blood our way rather than theirs.” – Talisha.

The action picks up and the tension mounts in this issue. Ash and company face a murder and everyone is a suspect. The humans accuse the monsters and the monsters accuse the humans. Dracula and his daughter get into a major knock down drag out. This is the most fun issue to date. It features in-fighting galore.

Nancy Collins knows how to strike a chord and bring the reader closer to the characters and even though this is more comedy than drama, she makes us care about these characters. The monsters reveal their weaknesses and the humans take no guff, even from creatures that are 3 times as powerful as they are. Collins manages to do this with her tongue still planted firmly in her cheek. She guides the reader into this universe and makes it look easy, even though I’m sure she had it a lot more difficult than it would appear.

Kewber Baal is clearly having fun with these characters. His Ash is the best I’ve seen in the medium of comic books. His Dracula is majestic and very sure of himself. He has a smug, condescending attitude towards everyone present, even in the face of being accused of a crime he claims he didn’t commit. One of the best comic book Dracula’s since Gene Colan and Marv Wolfman created Marvel’s Tomb of Dracula.

Gabriel Hardman has given us a fine cover. The Werewolf is howling into a full moon in a scene which features several of our hero’s in a I got your back pose. In the forefront is Ash with a mechanical hand were his chainsaw used to be. He’s holding a rifle. Michael is to his left. A somber look on his face. He has no weapon of any kind. He doesn’t need one. To his right is Dracula’s daughter, Eva, her head high with a noble look on her face. She’s holding a sword, poised for battle. All rendered with a competent determination that should draw the reader in.

The story opens peacefully enough, well, as peaceful as things can get in this universe. Our favorite phlebotomist Talisha is continuing to draw blood from humans to feed the vampires. She is still reminding all concerned that she’s not a Doctor. But then all hell breaks loose and the alliance between monsters and humans becomes threatened. This team will never be the same. Can they rise above this catastrophe and continue their war on the Deadites?

At the conclusion of this issue the Werewolf faces a catharsis which will challenge his role in our rag tag group of heroes. Will he stay with the group? We learn something very important about the Deadites which will make it harder for our champions to defeat them. Our warriors re-group and head to…Church? To be continued.