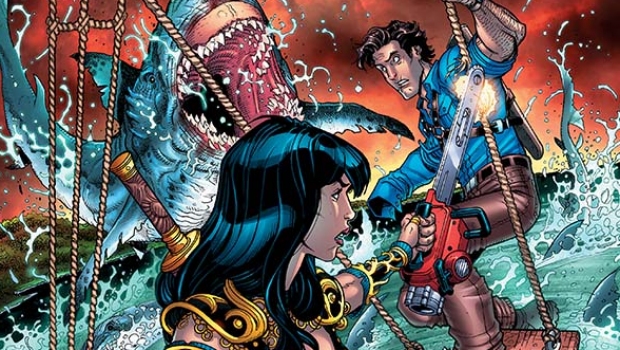 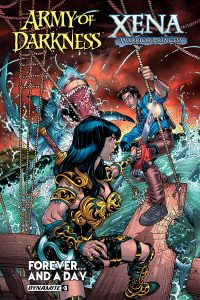 This issue opens with Xena’s life partner seriously injured while an army of Deadites is barreling down upon them. The situation looks dire. I love it when a comic book opens with action right away and Lobdell usually delivers on that front. The warrior princess is reminded that Ash gave her a page from the Necronomicon for just such a situation. Xena reads the spell to summon Ash. The Evil Dead champion was in the midst of some kinky fun with a beautiful girl when he was called away. This is a great chapter in the series and captures the requisite feel for both franchises.

I loved a lot of the work that Lobdell has done with both Marvel and DC and was pleasantly surprised to see his writing credit on this Dynamite series. I can see that Lobdell is a fan, both of the Evil Dead and Xena franchises. His characterizations are spot on and the way the characters interact is smooth. One of my favorite moments is when Ash is brought back in time to Xena’s period and asks a pub patron “It’s a free country, right?” and the patron’s response is “No, not at all. It’s an oligarchy determined to oppress the common man.” Great stuff.

Diego Galindo has fun with Lobdell’s words. Like how he opened this issue with Xena in deadly peril, along with her life partner Gabriella. The angles kind of grab you and bring you into the situation at hand. The look on Xena’s face as the deadites are bearing down on them is priceless; determination with a hint, only a hint, of fear. We know this is unlike any threat she’s ever faced. Another touch of excellence is when Ash is in the past and he enters a tavern. He stands out in his blue shirt compared to the native’s drab colors, kudos to Pete Pantazis for his awesome touch to this title.

Speaking of Pantazis, his work with Nick Bradshaw on this cover makes it one of the best covers I’ve seen in a while. It’s busy showing you an action-packed scene which will make fans of both franchises wonder what’s going on inside. Xena has Ash’s chainsaw and is making him walk the Planck with it. The sea is filled with monsters and a giant Jaws like shark is ready to eat the unsuspecting Ash as soon as he hits the water. The casual comic store surfer who knows both franchises will certainly have their curiosity peeked. All in all, a winner for sure.

One of the best things a story teller can do is keep ‘em guessing, and the team of Lobdell and Galindo does just that with this title, in this chapter we see Xena using a ripped-up page from the Necronomicon to summon Ash to aid her in this battle with the Deadites. But Ash goes back in time to before he met Xena, which allows him to meet her again for the first time. The question is, of course, is this what Xena wanted? Maybe there’s some type of clue as to what he needs to aid her in this era of history. Or was it a gigantic mistake in spell casting, ala Aunt Clara from the old Bewitched TV series. Ash winds up joining Xena’s pirate crew simply because he has no idea what else to do!