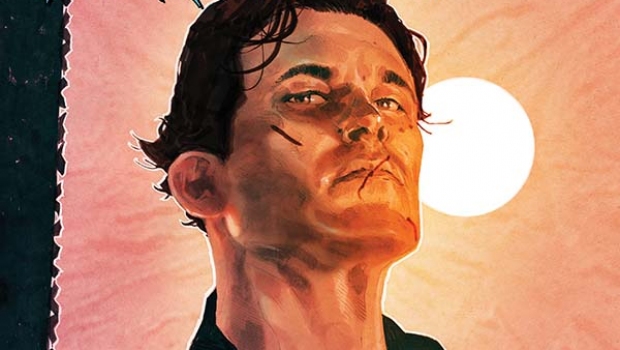 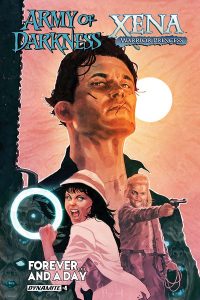 “…Is the Necronomicon playing me or trying to tell me something?” – Ash.

Ash has found himself in several different time periods as he seeks out Xena. But why can’t he arrive at the point in time that she summoned him to? Is the necronomicon messing up or trying to tell him something? An intriguing mystery that makes this cross over compelling. Both Xena fans and Army of Darkness fans should enjoy this tale. The issue opens with a brooding Ash who doesn’t realize that Amber is right behind him, listening to every word. He’s trying to sort out what has happened and what is happening in his quest to find Xena and the right timeline. I found myself intrigued with Ash’s predicament and agreeing with Amber’s assessment that anyone but Ash would have been driven insane by now.

Scott Lobdell maintains interest in this crossover by making us think about all the possibilities for why Ash keeps missing the right time line. The opening page shows the deadites on Xena and about to attack, giving the introduction a sense of urgency. I love time travel stories even though most of them have huge plot holes you can drive a truck through. (I even liked Terminator Genysis… I know, I know.) Lobdell has Ash disappear right in the middle of his conversation with Amber. He arrives at the end of World War 2 and winds up in that famous picture where a sailor is kissing his girl. As the girls boyfriend gets upset he and his gang of sailors chase Ash down but Ash gets away, only to wind up at the end of a gun from a relic hunter named Janice Covington. Great scene in a great issue. 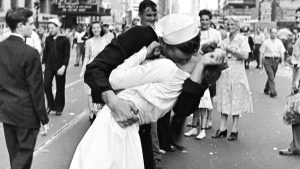 Diego Galindo is a good match for Scott Lobdell’s words. He makes drawing the characters for two different franchises seem easy and I know from artists that are friends of mine that it is not that easy to do. Since Ash winds up in World War 2 era earth, he gives the artwork a kind of pulp feel which works great for the story. I almost get a Chester Gould vibe from the WW2 era scenes. The splash where Ash is taking out some Nazi deadites is the best page in the book.

It’s a winner! We have Ash with his chin held high. He’s scarred but with a noble look on his face. Bellow him are the female protagonists that he hooks up with in this issue; Janice Covington, relic hunter and Melinda Pappas. Melinda has some sort of glowing round weapon in her hand while Janice is pointing a revolver with her right hand and holding a whip with her left. The sun is shinning bright behind them. Loved the cover.

Ash’s continued journey into the past while looking for Xena leads him to America, just after WW2. In his brush with Janice Covington, she winds up pistol whipping him into unconsciousness and taking him to some boat yard where he mistakes her partner, Melinda Pappas, for Xena. The ladies keep him tied up (I can’t help but think that a part of Ash is enjoying his current predicament. lol.) until they find out if he’s a friend or foe. Melinda thinks Ash looks familiar but can’t quite place him. Then it hits her; The Xena scrolls! She shows Ash and Janice the ancient scrolls which seem to show a drawing of Ash, but barefoot, which baffles our hero because his feet were covered when he visited that era. Melinda has a little surprise of her own for Ash as more of the mystery unravels. A fun way to end this issue, it may be a little anti-climactic for action fans, but it works for the story.
To be Continued.