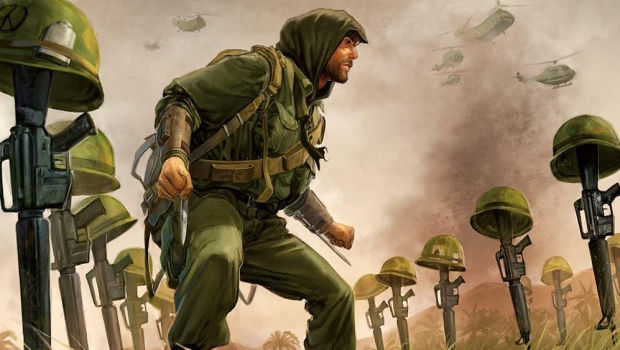 Assassin’s Creed: Bloodstone Vol. 1 is now published by Titan Comics and was originally cooked up in French by Guillaume Dorison with art from Ennio Bufi.

The story focuses on a Japanese hacker, Tomo, trying to investigate his mother’s murder by connecting to an ancestor in the middle of the Vietnam War.

As the premise of the publisher is telling: Tomo, one of the youngest members of the Japanese Assassin cell, has uncovered a conspiracy. More of a man of science than a man of action, Tomo investigates further, leading him to follow the footsteps of Assassins that operated during the Vietnam War. But what secrets will he uncover?

By now everyone in comics as well in games and even in movies, would know or should know about the Assassin’s Creed franchise which started in 2007 in launching a gem of a game (according to my sons). The series centered around a war between two secret orders, the Assassins and the Templars. These games have taken place in several different eras and moments in history; from the Crusades to the Italian Renaissance and from the Colonial North America to the The French Revolution and the Sikh Empire in India.

This time… the Vietnam War.

To be frank: get BOTH books and read it in one sitting/setting because it will just make more sense that way. There is a lot of character movement, and the shifts in stories might get the better of you at times.

On the other hand… trust the team to deliver and just enjoy this volume ‘as is’ and reread it once you get volume 2 in your chubby little fingers! It will all be good, I promise!

The amount of sub-plots and flashbacks do not all have the same weight to it yet the change in locations and countries might be the most challenging, especially since it is not really clear how much time is spend for instance in the Vietnam-war era. A feeling you will get a better grasp on once the 2d volume is read, I am sure.

The plot around Tomo in Assassin’s Creed: Bloodstone Vol. 1 is propelled at an ever-shifting and confusing pace. The characters move through different locations in different countries. The events in the past are fascinating, but you’re not in them for as long as you want to be there. These aspects make it difficult for the reader to get a grasp on what’s happening and to gain a relationship with the characters. This is especially true in the middle of the book, where it becomes very hard to maintain a grasp on the different plotlines. Sub-plots and character arcs are also hard to follow and often don’t carry much weight.

The story is fast, gritty and with the historical nature it really makes for a reading like no other, though! The art feels like Jock at his best, the story feels like a Bourne-movie and the Vietnam War era adds that soldier-UNfortune feeling, to make for a truly happy moment to be a comic book reader.

If volume 2 delivers on the characters and story, the way the start of the story and the stunning art already makes a solid entry point, then this is one of the best stories to come out of the franchise, I think.

The second volume of the epic new Assassin’s Creed adventure completes the story of Tomo, the youngest member of the Japanese Assassin cell, as he faces the horrors of the Vietnam War. What secrets will Tomo uncover in his ancestor’s memories, and what terrifying experiments took place secretly during this brutal conflict?

Below a preview to V02