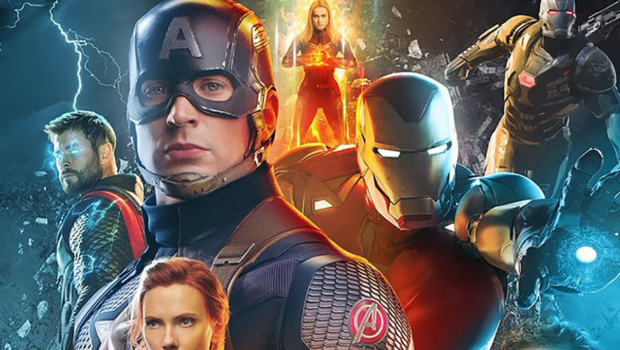 Oh, there will be spoilers. I can’t review the film without there being spoilers. The film begins with Carol Danvers, Captain Marvel (Larson), rescuing the old white dude Tony Stark (Downy Jr.) and Nebula (Gillan), as they are trapped aboard a spaceship and running out of oxygen.

I just can’t resist the irony of Brie Larson’s character rescuing an old white dude. The Avengers find out where Thanos (Brolin) is located and track him down to regain the infinity stones. The only thing is that Thanos has already destroyed them. The team then lay him to waste, rather easily, and return to earth. End of story, except, it’s not.

Antman (Rudd) returns from the quantum realm and together with the rest of the team, find a way to travel through time and bring the infinity stones to the present day. Five years have gone by since Antman had disappeared, but only five hours have passed for him. The team splits up into separate teams, each with the intention of finding a different stone at a different point in time. They then return to the present, but Thanos has caught wind of what’s happened and tracks them down to the final big fight, which includes just about every character from an MCU film in the last ten years. (Since Disney now owns Fox, I was hoping they would have thrown in Deadpool and a few X-Men to boot.)

My review: I am so mixed on this film. On the one hand, it’s technically one of the most brilliant films ever made. And each of the original Avengers does get a moment to shine. Paul Rudd gets a few dramatic moments and shows he can do more than just comedy. But the first hour drags and I think they could have lost about 20 minutes and the pacing would have been improved overall, and they wouldn’t have lost anything story wise. Chris Hemsworth’s Thor is reduced to, literally, a beer gut joke. I was kind of disappointed in the treatment of his character. I loved how each member of the team was willing to sacrifice for the whole. There were touching moments between Captain America, Thor, and Ironman as they reconnected with family members that they lost when they traveled through time.

I loved seeing the return of characters that disappeared in Infinity War. But it’s hard for me to accept the loss of certain characters, even though their death scenes were poignant and resonated. I don’t really want to see them go. I was hoping for a Black Widow solo film and I was surprised when her character died. We all kind of knew that Ironman was going to die, though I didn’t want him to. But he died saving the day, as it should be. His last words in this film were the same as in the first MCU movie “I am Ironman.” A nice moment.

But now to the plot holes, every time travel movie has ‘em and I just saw the movie so, There are probably more than I’m going to share here.

First, they must go through time and get the infinity stones, but then they must return those stones to the exact moment that they were taken in the first place. Ok, so when the stones are returned, doesn’t past Thanos still gather them up? Then we’re stuck in the paradox of history keep repeating itself. Kind of like the end of Dr. Strange? Captain America takes the infinity stones back in time but doesn’t return to the future. Instead, he decides to live as Steve Rodgers in the past. He’s sitting on a park bench at the end of the film as an old man and gives Sam Wilson (Mackie) the shield, implying that he’s the new Captain America. So, the events of the three Captain America movies didn’t happen?

All in all, this is a fun film, but I have to say, I’m left a little disappointed. Mostly in the direction that the MCU is possibly going to take without these iconic characters. I know, they kill superheroes all the time in the comics and bring them back. But I somehow don’t think that’s going to happen here. Anyway, it was a fun ride. We’ll see what happens from here.