“When we love, we do it with ..." /> Review: Barbarella #1 – Comics for Sinners
Kaching Comic Reviews 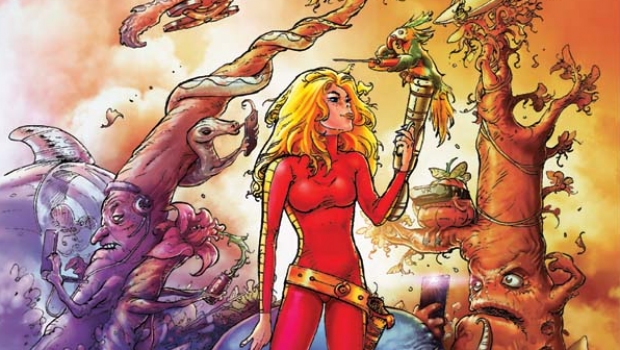 “When we love, we do it with our minds our souls our whole being. A little surgery can’t alter that.” – Barbarella

Ok, I go from my highest rated comic book review, to what is now my lowest rated comic book review. Oh, Barbarella #1 is good, but it’s not great. Mike Carey seems to be venting against the conservative religious right. As a reviewer for a site called Comics for Sinners, I have nothing against people sharing their views in comic book format (that goes for conservatives and liberals as well for me.) but at the same time I don’t like my comics littered with political crap, a few statements with the authors views are fine, as long as the story itself is good. I mean I loved it when DC and Marvel used Speedy and Harry Osborne as characters to, hopefully, prevent young people (who were predominantly reading comics in those days.) from getting involved with drugs, just as long as it wasn’t some kind of sermon and the story was good. I don’t want my comics to be preachy to the left or to the right. But here, from page one to page 18, we get Barbarella being subject to some religious worlds scrutiny. Enough is enough.

Ok, I get it, Mike Carey doesn’t like conservative religious politics. But again, enough is enough. Get on with the story! This issue opens with the leaders of a conservative, religious world observing some alien ships about to land on their planet. Barbarella’s is one of them. Our hero is immediately taken prisoner and has all sorts of ungodly stuff done to her. The first splash page is these world’s leaders singing hymns! And they take an immediate dislike to our hero because she is a hot babe in red spandex. Carey’s pacing is good, and we do feel a genuine concern for what happens to Barbarella. So, it’s definitely not bad writing, once we get past all of this worlds pseudo-scientific and religious discrimination we have a good story where our hero has to break out of prison after unjustly being held against her will and having her person violated. I just feel he used to many pages to state what could have been stated in one or two.

Kenan Yarar has a good feel for what’s going on here. His illustrations convey a half cartoon, half serious mode that fits the absurdity that is taking place on a planet which takes personal beliefs and makes them law. His take on outer space and the spaceships is clearly unique and original. I enjoyed how he approached the characters and he brought us a unique version of Barbarella. Yarar didn’t use Jane Fonda (the only actress to portray the character) and he also shied away from Jean Claude Forests original version of the character to give us something new and fresh, and yet there are hints of both Fonda and Forest in his renderings. For a character that hasn’t been drawn for over thirty years (Heavy Metal magazine,) dynamite has taken a bold chance at reviving this character and I’m glad they did.

This first issue sets us up for some erotic happenings that most comic book creators shy away from. Barbarella has found a soul mate in an unlikely place and this issue shows a relationship that most creators will only hint at. It’s a bold move on the part of the publisher. There’s a lot of nudity and sexual expression so this is a mature title that isn’t for everyone, but the audience that it seeks will probably be pleased as they haven’t found this type of creativity in the world of comics in a long time. It’s good stuff. *** (7.4 rating)