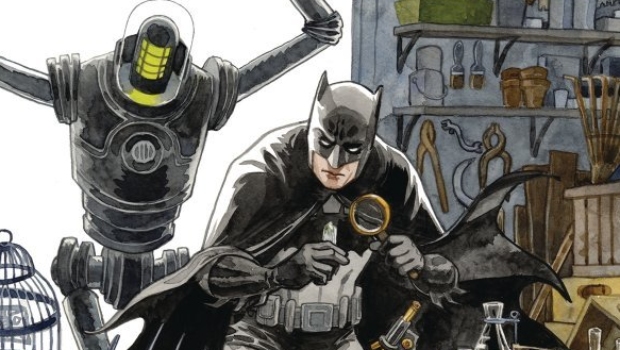 This issue is rich with crossoveritis. We’re in a couple of different universes and it’s fun to see how the heroes of one universe cope with a reality that isn’t theirs. Bruce and Clark are known to the authorities and Gail can’t swear. When she tries it comes out as gobbledygook.

Jeff Lemire is so good with revisionism and it shows in this cross over event. He brings us into a world where Bruce Wayne is aching to be Batman but would get into trouble if he goes out on the prowl. Clark is happy just tending to the chores on the farm. It’s like he’s tired of being the savior of the universe and misses his life in Smallville, he’s found solace that he didn’t know in Metropolis. I’m really enjoying Lemire’s take on these heroes and his own characters too, though I admit I’m not as well versed in the Black Hammer characters as I am with the Justice League, but I’m having fun finding out what they’re all about too. Great stuff includes the sheriff’s talk with Bruce Wayne and a bizarre encounter with a familiar villain.

Michael Walsh has his work cut out for him. He must take the DC and Dark Horse characters and make them believable for two sets of fans. It’s a challenge that he’s proving to be up to as we see the Justice League blend into the Dark Horse world and the Authority figures are proving to be strong here as Walsh keeps a firm grasp on their legacy. Highlights include the John Stewart Green Lantern entering the para-zone. Also, Clark Lamenting over the loss of his true love.

The characters must adjust to their surroundings and get used to not being able to behave like they’re used to in their own world. They’re strangers in a strange land and it’s fun to see them cope with their surroundings. This issue is so well written and gives the heroes of both universes a lot to contemplate as we come to the end of this issue and see the memorial for the fallen hero…to be continued.