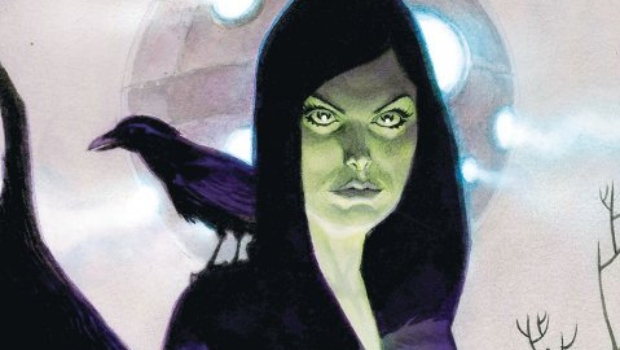 â€śThis guy is not a Martian. You ever see a green Martian before? Please!â€ť â€“ Barbalien.

This issue opens with heroes from both universes trying to figure out how they wound up in the other universe and essentially blaming the other team for their plight. The tension mounts as both universesâ€™ heroes are desperate to find their way home and neither side knows how to go about it.

Jeff Lemire has written for both teams and created the Black Hammer characters, so he knows what makes both sides tick. The banter between the two sides is what makes this issue stand out. He is so comfortable writing for either team and itâ€™s comical to watch the denizens from both universes try to figure out each otherâ€™s strengths and weaknesses. Each issue gets better than the one before it. Great stuff includes the Black Hammer heroes coming to realize that they need their DC counterparts to succeed in finding their way home and the revelation as to who the strange man really is.

Michael Walsh brings a fresh perspective to the Justice League as he draws them Dark Horse style. His style is unique to these characters and they havenâ€™t been depicted in this fashion before. He makes it seem natural for these characters to mingle with their Black Hammer counterparts. Highlights include Green Lantern and Colonel Weirds trip to the para-zone. And Cyborgâ€™s first meeting with Talky Walky.

Most comic book fans probably didnâ€™t think this match up could happen, given the diverse nature of both titles. But the revelation of the strange man suddenly has it make sense. In fact, we should have known this all along. Its great fun seeing this revelation come to light. This issue ends with a fun turn that makes us impatient for the next issue. ***1/2 (8.7 rating)