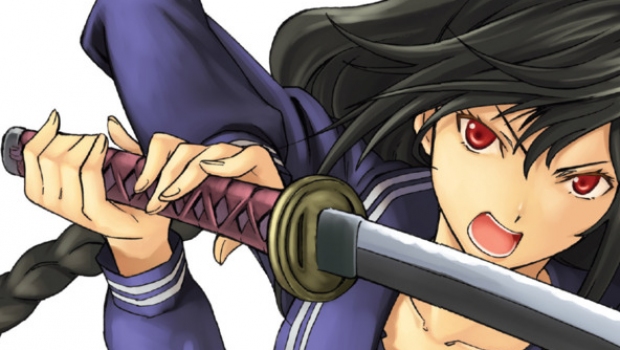 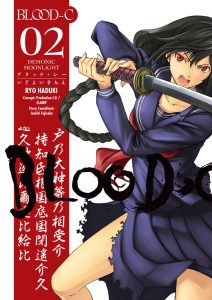 An American investigator with the U.S. military, David, is investigating mysterious happenings near the Yokohama base. His investigations lead him to facing ancient demons, aggressive zombies, child snatching ninjas and scariest of all; military politics. Saya becomes more prominent in this story as she helps David discover more about the sword wielding stranger that’s been helping David solve this case. This issue opens with our investigator gaining a new name Tadayoshi. It’s revealed that his partner doesn’t remember any of the goings on and has been living life as a normal human being. We discover that their are fewer ancient ones since the humans have encroached on their habitat. And it’s looking good for our hero as the series of strange incidents in Japan drew to a close. But it would be quite a boring comic book if things stayed that way so we are treated to an attack by a female vampire onto one of our protagonists. Here the action heats up.

Glorious Manga art in beautiful Black and White. The collaboration between Dark Horse and CLAMP along with Production I.G. is a winner. As soon as we discover that David’s mission is complete we find betrayal from within as one that he calls friend turns out to be a blood sucker. We finally learn the truth about Saya that she’s been buried alive within her coffin for two centuries. Her blood is mixed with the ancient ones and she feels that she’s been betrayed by humans. One of the great things about Manga vampires is that they always have a rich back story. This team deivers as Saya finally recalls who she is.
Ryo Haduki gives us an artistic experience that enriches the story 100 fold as we are brought into this tale with great expectations after what’s gone on before and Manga fans as well as newcomers won’t be disappointed. His battle scenes are so well executed that we find ourselves moving smoothly through this story. The action picks up and Ryo gives us heightened energy with each danger that our heroes face. Brilliant work.

A nice cover featuring Tadayoshi with his back to the reader yet head tilted to see what’s behind him. He’s got his hand on the sheath of his sword and he’s about to draw it. Beside him is exposition telling us what’s gone on before and what to expect in this issue. A typical Manga cover well drawn and should lead the casual comic book surfer to want to discover what’s inside.

This tale is amazingly well written and drawn but we are revisiting some things that have gone on before. It’s a valiant effort and still entertaining as we are shown somewhat different demons and monsters. We’ve seen Saya in action before, although there is the twist of her being manipulated into thinking things aren’t the way they seem. It’s still a lot of fun and the chief antagonist, Master Mahito, delivers the chills. Will Sayo return to normal and control her inner demons? Will the demons break through to our realm? Can our heroes stop Master Mahito? All will be answered inside!