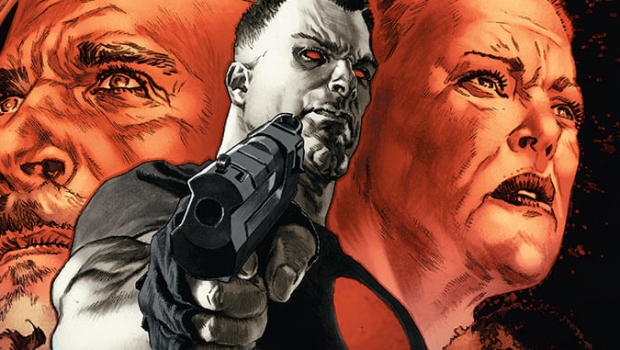 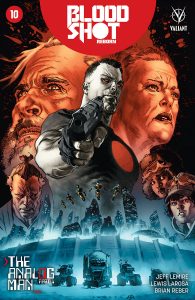 This issue opens thirty years into the future with two young boys spying on an old man that is considered to be a wizard. They are clearly not supposed to be there. It’s a scene that reminded me of Alejandro Murrieta (José María de Tavira) and his brother from the beginning of The Mask of Zorro. It’s a clever way to open this issue as we see an older Bloodshot and Magic and get a glimpse into what kind of future awaits them. I like that Bloodshot is still doing good for the community by stealing water from the rich, who barely let the townspeople have enough to survive on. This shows us the humanitarian side of our hero and that this couple will stay together through thick and thin. It’s different from most of the superhero comic books out there and a refreshing look into what makes our hero tick.

Lemire is on his game with Bloodshot as he shows us an older, tired version of the character at the beginning of this story. He assures Magic that he’ll be back but she calls him on that and says that one day he won’t be back, but he scoffs at her pessimism, yet while he’s away on the mission, he contemplates what she said and realizes that she’s right, one day, he won’t come home. It’s refreshing to me to see a writer pour his creative juices into a character to flesh them out and make them three dimensional and not just some cardboard cutout hero that we can get for a dime a dozen. This Bloodshot knows his weaknesses even as he celebrates the power that went into his creation. A great read from start to finish.

Lewis Larosa keeps churning out images that are near perfection as we are treated to panels that are almost miniature paintings. His realistic attention to detail is a sheer delight as the story takes us from the far future to present day and the raw emotion that the character feels can clearly be seen etched in his face. Each wrinkle in the old Bloodshot tells a story and we can sense the burden that the character has carried through his life of sacrifice for the citizens of his small town. Larosa’s love for each character is depicted on every panel in this work.

We couldn’t ask for a better cover. Our hero, present day, in the center pointing his gun directly at the reader, letting the comic book surfer know that he means business. On his right is the older image of himself and on his left the older image of Magic. Supporting characters faces below them along with man-0-war characters flying over the city which is at the bottom of the page. A convoy of trucks is baring down hard in a straight line that is menacing. The Los Angeles of the future means business. It’s a cover that shows the reader exactly what they will get. I love how the cover encompasses the entirety of what’s going on inside.

The Analog Man part one is a good introduction to what could be a very solid story for Bloodshot. Fans of post-apocalyptic action/drama will be enthralled with what Lemire has planned. Mad Max is an obvious influence but I know in Lemire’s capable hands this will be more than just a Fury Road rip off. The set-up leaves me wanting more by the end of this issue, which includes the return of an old friend to the series. I couldn’t be more satisfied with this issue. ***1/2