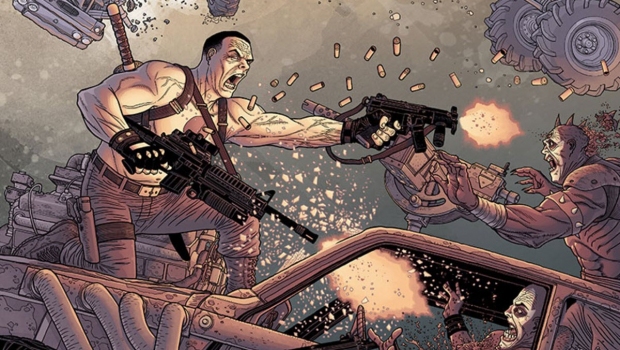 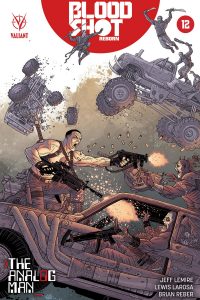 This story opens in the city of Angels, thirty years from now. Bloodshot was trying to live in peace with his true love -Magic- But that peace was shattered by violent terrorists known of as the Shadowmen. Bloodshot re-teamed with his old partner, Ninjak on a routine mission and now has sworn vengeance on those who wronged him. He has learned that the leader of the Shadowmen is a mysterious person known only as the Man in the Tower.

Jeff Lemire begins this issue by hitting Bloodshot over the head with a unique revelation that the man in the tower is called Magic. This triggers thoughts of his true love as he follows Ninjak up from the sewer into a Shadowmen ambush. No slowing down for our hero’s in this issue as the action begins almost immediately.
Bloodshot has the advantage as the X-O Drones can’t see him because of the old technology involved. However, they can see Ninjak, putting him in peril. Bloodshot’s hallucinations continue and he can no longer trust his senses as he tries to reach the tower. Lemire wants the reader to go through Bloodshot’s insecurities with him as he tries to find out what happened in the past.

Lewis Larosa and Stefano Gaudiano give us some more realistic painting like art that’s sure to keep the reader glued to every page. The characters are beautifully rendered with close attention to detail involving every muscle and vein in the human body. In an interview Larosa described his influences as Frank Frazetta, Mike Mignolia and Kenny Nolan among others. Fans can definitely see those influences in his work as he strives to a purely realistic take on his scenes. The panels flow with an action that helps bring the reader into Bloodshot’s universe.

Bloodshot has been chasing ghosts to try to find the Man in the Tower. And this issue finally shows who that man is. Will our hero be able to accept what he learns? A man’s strength is measured in many ways; physical, mental, spiritual and emotional. One can be strong physically and not in other areas. We can see the anguish in the final revelation of the man in the tower. He was strong enough to tear down the door and get to the bottom of what was going on. But now, will he have the emotional strength to deal with what he learned? It’s a very sobering conclusion to this issue, but not the end of the story. To be continued. ****