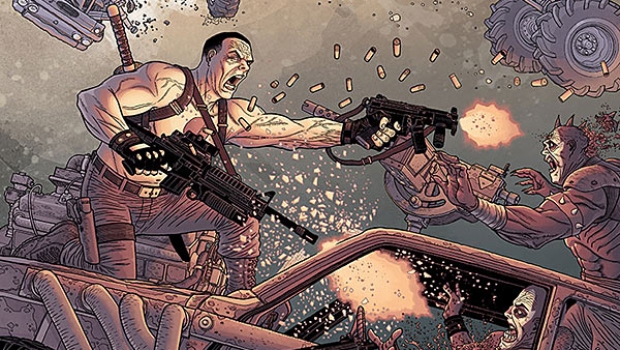 “I went way beyond insane a long time ago.” – Bloodshot.

Incredible. I’m almost speechless. But I have to review this so I can’t stay silent!

Valiant has always been one of my favorite companies and this issue sums up why. The original run of Bloodshot was outselling many Marvel and DC titles. Including issue #1 which came in at #4 for sales in 1992. Beating Batman, Superman and Spiderman. And now the all new Valiant is re-booting the series. And it’s a winner!

I usually discuss the story before the art, but not this time. Lewis Larosa has given us the most realistic comic book art in many years. I was completely blown away. I had to re-read this issue simply because I loved the art so much. The splash on page 5 alone is worth the price of the issue. I hope he stays with this title for a long time.

Jeff Lemire begins this issue with a leisurely game of chess. Bloodshot is under-estimating his female opponent and she leads him to believe that she knows nothing about the game. As soon as he looses the game, he hears something. It’s the Shadowmen and they are attacking full force with Goo-tech anti-aircraft. Our heroes jump out of an airplane into the heat of battle. Of course Bloodshot doesn’t use a parachute. After he lands with a thud he’s asked if he needs a painkiller but he declines. This scene is orchestrated just to show the reader how tough our nanite-infected hero is.

Page 14 gives us another splash, which, incredibly, is superior to the one on page 5. At this point Bloodshot encounters an enemy that has some of the answers that he had been searching for. After a lengthy battle which comes full circle for our hero, we learn only that Bloodshot has to find the “Man in the Tower.” The issue stops here and then promises to conclude with the next issue.