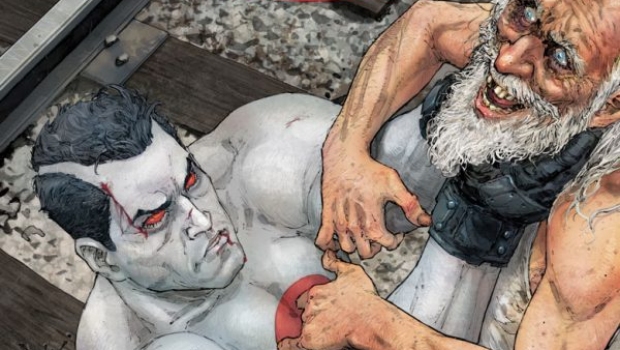 This issue 0pens with our heroes in a van driving up to a residence that Ninjak led them to. It’s the home of someone named King. They’re allowed to stay in the barn and their contact is a woman with a Mohawk that calls herself Punk Mambo. There’s instant friction between Punk Mambo and Magic. You can tell they don’t fully trust each other. Can Mambo get our heroes in touch with the long-lost Ray? Is Ray dead as they feared? This issue answers a lot of questions and is an exciting tense read.

Jeff Lemire delivers the goods with this issue. His no-nonsense heroes are here to deliver justice…street justice but justice none the less. There’s a strong confrontation between Bloodshot and “Daddy,” Magic’s father. Then there’s another corporation attempting to recreate the nanite technology that created Bloodshot in the first place. But what they do will have a lasting impact on our hero and cause him to not be the hero that he should be. Great stuff, a powerful issue to say the least and I couldn’t put it down.

La Rosa and Suayan bring us intense panels that showcase the insanity that is “Daddy” and the anger that Bloodshot feels towards Magic’s father. There work is a fine compliment to Lemire’s words. The final splash page of this issue brings the drama home and we feel the hopelessness of our hero’s plight in their capable renderings. I won’t reveal what happens, of course but this issue is a must for every Bloodshot fan.

This issue shows us the vulnerability of our heroes’ in ways that we’ve never seen. As soon as we think they have the upper hand, the tables are turned, and they can not accomplish simple tasks that should be no risk for them. We see Magic’s helplessness to do anything for Ray and Bloodshot is compromised in his efforts to dish out the justice he so yearns to do. He may have to rely on his wits instead of his brawn! To be continued. **** (8.8 rating)