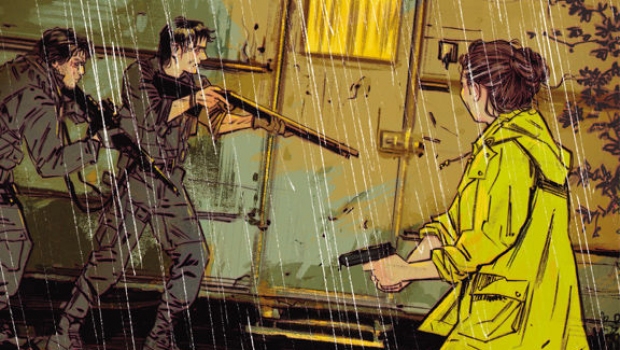 This issue is a tension filled adrenalin rush with a shock ending. In reading the tale of the Briggs family I can’t help but draw parallels to the real-life standoff between the authorities and the Bundy family of Oregon. The details are different but the scenario is familiar. Both distrust the government and believe they are within their rights to protect their land. The Briggs family is now, however, a matriarchy as Grace is in control of what goes on in her land. The news media has picked up on some interesting events and is giving extensive coverage to the situation. 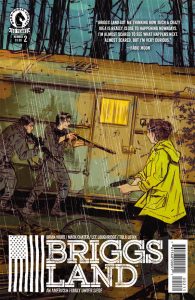 Brian Wood knows how to draw the reader in as he opens with daughter Annie, armed, casually walks from her house past more armed members of her family and brings food to their guests. Only one line of dialog in the first three pages of this issue. The family has now accepted that they are the targets of a government investigation and patrolling their land like a battlefield has become the norm. Great writing throughout this issue gives the reader a sense of foreboding until it’s final, odious end.

Mack Chatter brings a sense of realism to the goings on in this issue. The looks on the characters faces are of calm resolve. There is no over exaggerated expressions of hate or anger, just the normal day to day existence of a family caught up in a dire situation. They have accepted their place and are doing what they believe is right. His characters remind me of the old Dave Mason song “There ain’t no good guys, there ain’t no bad guys, there’s only you and me and we just disagree.” Awesome story, definitely for adults and not the kiddies.

A great second issue as we learn more about the relationship between the brothers and the reasons for the standoff. The family struggles with what will happen to them if they let their guests go. They pound their heads trying to figure out what to do and how to end this situation yet keep their land and their freedom. The pressure comes to a head when one of the family confronts Homeland Security on their property. The end of this issue will have readers clamoring for more as they wonder what will happen next as the feds plan to move in at any cost. Awesome storytelling, taut and a turning point for the family makes this a must read! **** (9.4 rating)