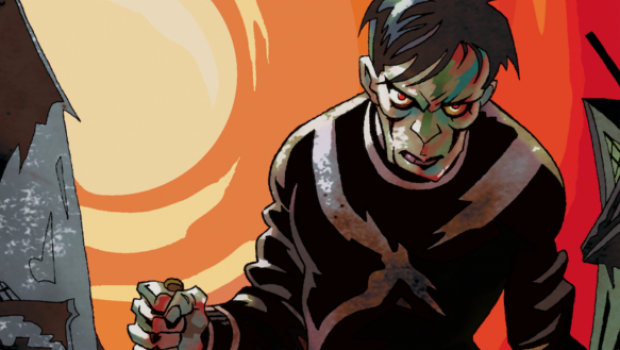 Yet another adaptation of the German silent classic. If you’re interested, you can see the whole movie for free on YouTube. The first issue follows the actual film closely. It opens with one of the protagonists fiancé, Jane, arriving in an open field, she appears to be in a trance, like a drug induced state. The boyfriend proceeds to tell his friend about the horrific ordeal that he has gone through. The town of Holstenwall is obviously a matte painting in the movie and is rendered accurately here in the comic. It is a somber tale and the film is considered to be one of, if not the first horror film ever made and Olmos obviously has a passion for the source material. 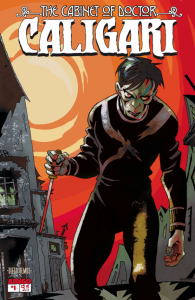 Diego Olmos does both writing and artistic chores for this adaptation and he does a beautiful job blending the characters into the scenery in a way the original actors could never do. As the film is an example of abstract German expressionism and told in fairy tale style, so the comic book recreates that world in a style that almost begs for the film to have been done in animation. But, alas, animation, though it existed in that day, would not have been able to recreate that feel for a few years. The movie actually painted some of the shadow and line effects into the scenery used on the set and Olmos has fun recreating the sets from the original. The introduction of Caligari is ominous and a great abstract splash page that gives sharp contrast in Black and white. A strong adaptation to say the least. The character of Caligari is menacing while the Somnambulist is appropriately innocent and frightening at the same time. Because the character is unaware that he’s not like other people and slowly comes to that realization later, this creates an unpredictability which Olmos makes great use of in his story telling. Similar to Frankenstein’s monster, the creature isn’t intrinsically evil, simply misunderstood and is pushed into the conflict from non-understanding humans. 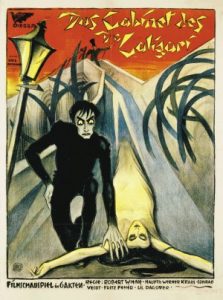 A great cover that is directly inspired by the original poster for the movie. Unlike other adaptations it isn’t just a copy of that poster but takes on a more menacing tone as the somnambulist is carrying a blood stained knife, implying that he’s recently killed someone. Unlike the movie poster, Jane is not on the cover. The moon is bright yellow while the sky is an orange that bleeds into red, again implying that something evil has happened in this quaint little village.

The first issue adapts the first part of the movie with an odd to German expressionism that is seldom seen in the world of comic books. The story is strong enough to appeal to fans of horror and the art is beautifully rendered in a way that should also appeal to art-house fans and curiosity seekers who’ve never read the story. Even if you own every adaptation of the story told before this one, I highly recommend that you pick this up. A great adaptation of a silent classic.