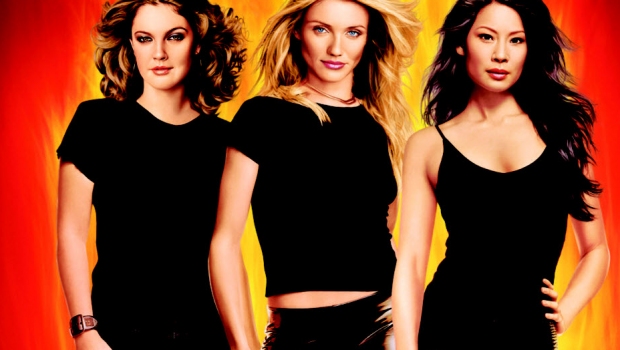 This movie is not strong for story or plot, but it has so much action, one-liners, visual glorifications of all the heroines as well as all out campy fun, that it will entertain even the skeptics. The flow of each movie, driven by the different lead characters, is fast and feel-good and even though the second movie has a more dark side with a former Angel (Demi Moore) turning tables, you will be entertained throughout!

Natalie is played by Cameron Diaz and is very smart but o so silly.
Dylan is played by Drew Barrymore and is a real tough act to follow but she does love fun and her love affair with Tom Green is legendary by now.
Alex by Lucy Liu is a classy but tough and sleak.

They all work together for a Charlie, who actually never meets his girls face to face but with the help of Bosley (again a brilliant role by Bill Murray) the Angels get sent out on missions nobody else will even dream about taking on.

Sometimes the SFX are not really working but the idea of having a 1.5 hrs long videoclip is not far from the truth and everyone HAS to have this one in their collection!

The first movie focuses on the Angels tracking down a young tech-tycoon and saving him, but soon they realise the assigment is one with more then one side and they really need to trust on themselves and their skills to get this one playing out in their favour.

The second movie feels like much more back-story since a former Angel as well as a former lover/ally is looking to make their mark on the Angels.